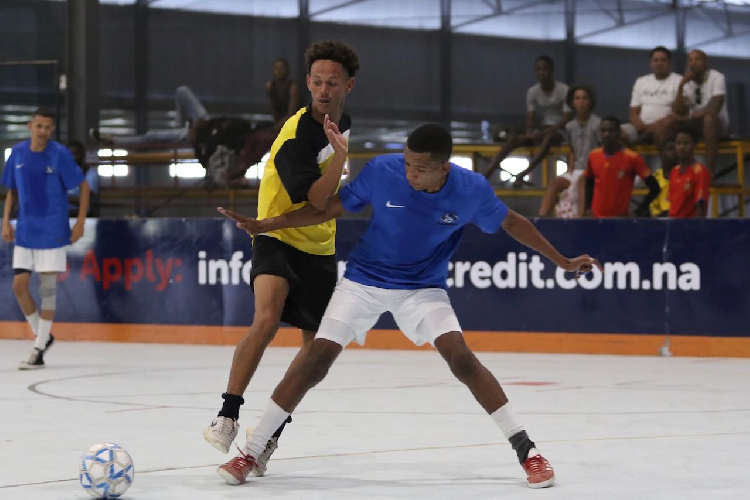 THE second Express Credit Summer Futsal League which gets underway at the Windhoek Showgrounds this weekend, was launched at a press conference in Windhoek yesterday.

League organiser Andrei Tirtirau said the league had grown by leaps and bounds with close to 1 000 players now competing in various divisions.

“We are now at 960 players in the Summer League. We’ve had really good growth and we are looking forward to rolling futsal out,” he said.

“We are busy organising a referees clinic where we will train more referees for futsal, while we are also busy with a coaching clinic together with Fifa and the NFA,” he added.

Besides the Summer League, Tirtirau said they had several more tournaments lines up.

“The Summer Cup will once again take place in November, and then we have another cup competition which we are planning for the coast, where we want to do an action-packed futsal competition that’s going to be a 10 minute super quick addition. We are also planning a beach cup at the Mole in Swakopmund, and we are basically getting our approvals in order to try and build the sport up in the country,” he said.

“We are looking at launching an academy in January in Windhoek and at the coast, while we also want to start a league at the coast. We are still looking for partners in the north and in the south so if people are willing to get involved, please let us know,” he added.

Co-organiser Absai Simon said a lot of new teams have entered the various divisions for the Summer Cup.

“The summer league is starting out well, we got many teams that are very interested, especially on the ladies side where we got about nine teams in the ladies division. In the u17s we’ve got eight teams so far, while we also have an u15 team from the NFA girls football academy which is very good, they are going to learn a bit about futsal,” he said.

“On the boys we are also filled up, we’ve got eight teams and they are all new teams except for Swallows and the Birds. The first division is packed, we’ve got 30 teams in A and B divisions, and most are also new teams. The Premier League has still got the same teams, but now they will be going for it because the bottom two team will be relegated,” he added.

Tirtirau said they were still looking at affiliating to the Namibia Football Association.

“We are not yet affiliated with the NFA yet, we are looking at provisional affiliation this year, and our papers will still be submitted. We are taking our time because we are still running it as an amateur private league to build a data base of players and to make sure that we are strong enough to actually affiliate and to know that we have a strategic plan going forward, rather than jumping the gun too quickly,” he said.

“That’s why we are having a lot of clinics going forward, we’ve got a referees clinic starting soon, and then a coaches clinic and from thereon we will just keep on building to where we need to be,” Simon added.

This weekend’s matches starts at 15h00 at the Windhoek Showgrounds, and continues at 09h00 on Saturday and Sunday.

‘Bottles are dangerous weapons’ – The Namibian