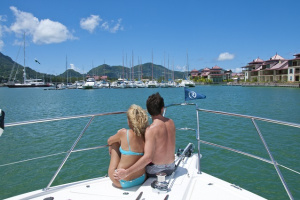 The figures show that 10,266 visitors arrived in Seychelles in the last week of 2022. (Gerard Larose)

(Seychelles News Agency) – The Seychelles tourism department has expressed satisfaction with the number of visitor arrivals at the end of 2022, which has surpassed expectations.

The figures released by the National Bureau of Statistics for the week ending January 1 show that the year-to-date total of arrivals is 334,552 which represents an increase of 81 percent compared to the same period in 2021.

The Principal Secretary for Tourism, Sherin Francis, told SNA that this is quite an accomplishment for the country and that “the number is even better than our second predictions of around 330,000 after we had met our original target.”

The figures show that 10,266 visitors arrived in Seychelles, an archipelago in the western Indian Ocean, in the last week of 2022.

Seychelles’ tourism industry, the top contributor to its economy, was greatly hit by the COVID-19 pandemic, where like many countries, it had to close its borders. In the last couple of years, the country has been rebuilding this industry through additional marketing campaigns.

“We started the year with many uncertainties, one of them being the Ukraine war as Russia at the time was our main market,” said Francis.

In an earlier interview with SNA, Francis had stated that events worked out in the favour of the destination, because “when the war broke out, it coincided with the period when our traditional western Europe markets were starting to relax their COVID travel restrictions.”

Cancellations from Russia and Ukraine were being filled in by western European markets.

In 2022, Europe continued to dominate the visitor arrival figures with the latest numbers showing that Germany is the leading market with 44,772 visitors, followed by France with 44,503 and Russia in third place with 31,180.

To note that with the winter schedule, Seychelles has seen the return of Condor and Aeroflot, which are supporting the recovery of the destination. It is also getting extra charter flights from Israel.

The other regions Seychelles has managed to attract the most visitors from for the year 2022 were countries like Israel, the United Arab Emirates and India, which combined have brought in 51,668 visitors.

Francis told SNA that “she hopes that this key sector will do better in terms of tourism earnings at the end of this year.”

S.Africa slams ‘out of reach’ climate aid for poorer nations