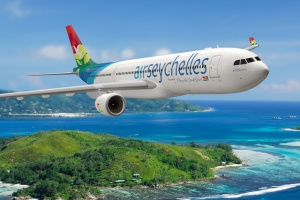 The Almaty service will be operated on a two-class Airbus A320 Neo leaving on December 26. (Air Seychelles)

According to a press release, the twice-weekly seasonal service will operate until March 27, 2023, to the largest city in Kazakhstan, a country of almost 20 million people.

The Almaty service will be operated on a two-class Airbus A320 Neo leaving on December 26 and arriving at the Seychelles international airport of Pointe Larue on December 27 at 7 a.m. Flights both to and from Seychelles, an archipelago in the western Indian Ocean, will have a technical stop in Abu Dhabi.

Sandy Benoiton, acting chief executive of Air Seychelles, said, “After studying Kazakhstan and the Central Asian region for many years, we’re thrilled to be able to launch our initial service into Almaty on a seasonal basis.”

He added that “Kazakhs have discovered Maldives in the last few years and now are eager to explore other parts of the Indian Ocean region. We look forward to welcoming the first flight during the festive season and will be constantly evaluating the performance so we can increase flights based on demand.”

The Minister for Transport, Antony Derjacques said Seychelles is proud to see its flagship airline bring its award-winning services to Kazakhstan, adding one more powerful tourism market to its growing network.

“Our national airline is delivering on its mandate to be a key economic enabler, boosting tourism and trade, and creating jobs. The new service strengthens the warm relations that have developed between Seychelles and the Republic of Kazakhstan, and we look with eagerness to seeing visitors from Kazakhstan enjoying our splendid beaches for their next holiday,” he said.

Air Seychelles, which is wholly owned by the government, has been flying for over 45 years. It operates flights from Mahe, the main island, to Tel Aviv,