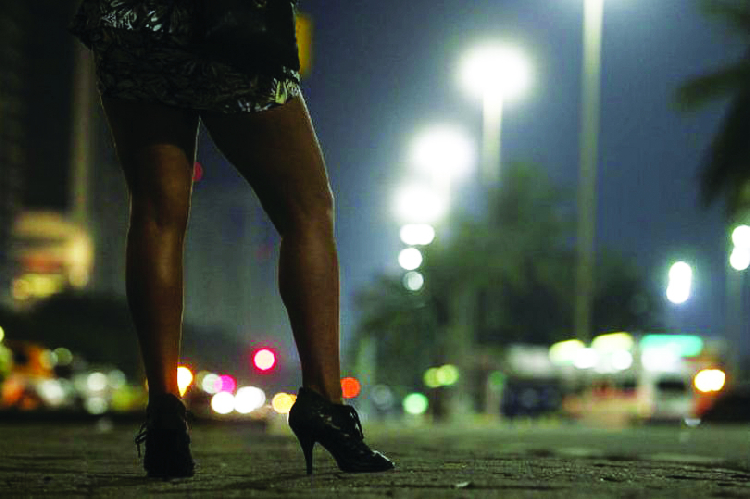 UNDER the lights of the city centre behind Checkers, a few women stand by the road in skimpy skirts and heels.

Some are on their phones, others are waving at cars driving by.

She runs towards the car and starts chatting to the driver.

There seems to be a misunderstanding. She shakes her head and takes a step back.

Her name is *Nangula (28), a mother of three and the only breadwinner at home.

Her black heels have seen better days, but she managed to pair them with short jeans and a brown crop top tonight. Her Brazilian hair is a mess. The situation at home forced her to start selling her body for sex, she says.

“Do you think I like having sex with random men? It’s not fun. I just want money to help my family,” she says.

“My family does not know about this. I tell my kids that mummy is going to work the night shift.

My mom is in Ohangwena. So, she thinks I have a real job in Windhoek, because I send her money every month,” she says.

Nangula stays in Havana. She started standing on these streets in March last year. She charges N$300 per round.

She recalls one rough night when the girls were fighting over clients.

“It happened so fast. I was at the other end of the street. I heard two girls arguing while standing next to a red Jeep.

The driver eventually drove off and did not take any (of them). It doesn’t really happen much,” she said.

On the other side, a group of ladies stand next to broken bricks, bracing the cold night. The smell of sewage drains is hard to miss.

One of them, *Blessings (48) is from Zimbabwe. She says after finding life hard being a single mum and an orphan, she could not bear the hunger at home, so she came here.

Blessings is clad in a pink glittery short dress with golden heels.

“I come here every day, from 19h00 until 05h00 just standing. Sometimes you don’t get customers,” she admits.

“If one says let’s do business for N$150, I can help him because you do not want to go home with empty hands,” she says.

Next to her is a furious *Natasha. Her night was ruined after her ‘katamagochi’ fell on the ground.

“Ah, nxo. It’s not switching on, oh, and my customers,” she laments nervously.

“We’re not here for fun, we’re doing business. The police should stop targeting us. They harass us and demand money from us, saying they will deport us,” she says.

With hopelessness in her eyes, she says they are not safe and want to operate in a safer environment.

“Most of the time we get raped, but when you try opening a case with the police, they instead start calling you names. They say I wasn’t raped, I was just not paid. We then go to the clinics to get treatment after coming back again to hustle,” she says.

Natasha says they have been robbed many times by men they thought were their customers.

“They take you from here, have sex with you and dump you in the bushes,” she says.

It is pitch dark but some ladies are seen standing behind OK Foods on the other side.

A black Polo stops. A lady in a red, short dress with blue heels hops in. For the rest of the ladies, it is going to be a long night.

*The names have been changed to protect the women’s identities.