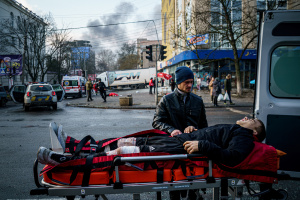 A man helps an injured civilian after Russian shelling to Ukrainian city of Kherson on December 24, 2022, where five were killed and 20 injured. Ukrainian President Volodymyr Zelensky on December 24, 2022 blasted Russian “terror” after shelling left at least five dead and 20 injured in Kherson city, which Kyiv’s forces recaptured in November. (Photo by Dimitar DILKOFF / AFP)

On the day marking 10 months since the start of the war in Ukraine, shells rained around a busy market in the southern port city, starting a fire.

“There was a first hit at a department store, and a second at the market. People are saying there are a lot of people dead,” 38-year-old Leonid Tataryn told AFP.

Standing next to her husband’s corpse and holding his blood-soaked jacket, a woman cried: “The medics tried (to save him), but there was no pulse.”

Despite Russia‘s retreat from the city, Kherson remains within reach of Moscow’s weaponry and under constant threat.

“Kherson. In the morning, on Saturday, on the eve of Christmas, in the central part of the city,” Zelensky said on Telegram, publishing images of the attack and calling it “killing for the sake of intimidation and pleasure”.

“It is the real life of Ukraine… The world must see and understand what absolute evil we are fighting against,” Zelensky said.

Among the victims was a butcher named Lesha who had been working at the market “maybe for 20 years or more”, according to 43-year-old resident Oleksandr Kudryashov.

“He came out to have a smoke, he was standing right here. We pulled his body, he was already dead,” Kudryashov told AFP, pointing at a bloody staircase.

“While families in Europe, North America, and beyond prepare festive dinners, spare a thought for Ukraine which is fighting evil right now,” Foreign Minister Dmytro Kuleba said on Twitter.

AFP journalists at the scene saw several bodies lying on the street, including a man killed in his car.

Rescuers and police officers were seen comforting a man in tears next to a lifeless woman.

Severely injured residents lay on the ground, medics tending to them.

“Seven people were killed, 58 Kherson residents were injured, 18 of them are in a serious condition,” the latest statement by regional governor Yaroslav Yanushevych and the presidency said.

Sixty-six cars caught fire in a residential area of the city due to the shelling, the emergency services said.

The fires were put out after 40 minutes but the number of dead and injured was still being “established”, they said on Telegram.

Russian President Vladimir Putin in September announced the annexation of four regions in the east and south of Ukraine, including Kherson, after Moscow proxies held referendums there — denounced as a sham by Kyiv and the West.

His troops never fully controlled any of the territories and last month were forced to retreat from the Kherson region after a months-long Ukrainian counteroffensive.

But Kherson has been regularly bombarded ever since, with a heavy toll on civilians and the power supply to the city.

On Friday alone, the Kherson region was targeted by 74 Russian strikes, leaving five dead and 17 injured, according to regional authorities.

On December 15, Russian shelling killed two people including a Red Cross worker in Kherson and completely cut electricity as temperatures plunged below freezing.

Much of Ukraine is struggling without heat or power after Moscow started targeting electricity and water systems nearly two months ago.

The UN’s human rights chief has warned the campaign has inflicted “extreme hardship” on Ukrainians this winter, and also decried likely war crimes by Russian forces.

“Ukraine will be able to prevent such tragedies if it has more means of counter-battery warfare, more artillery and more long-range ammunition,” Ukraine Defence Minister Oleksiy Reznikov said on Twitter in the wake of the attack.

The strikes come a few days after Zelensky visited the White House to meet with US President Joe Biden and argue for a $44.9 billion emergency military and economic aid package for Ukraine. It was approved by US lawmakers on Friday.

Ukrainian servicemen were kidnapped near Izyum and “kept in a pit at a recreation centre without water or food. The occupiers beat one of (them) with a hammer”, according to the statement.

The accused “fully admitted their guilt”, the statement said.

OACPS: Seychelles urges access to financing for nations facing plights beyond their means