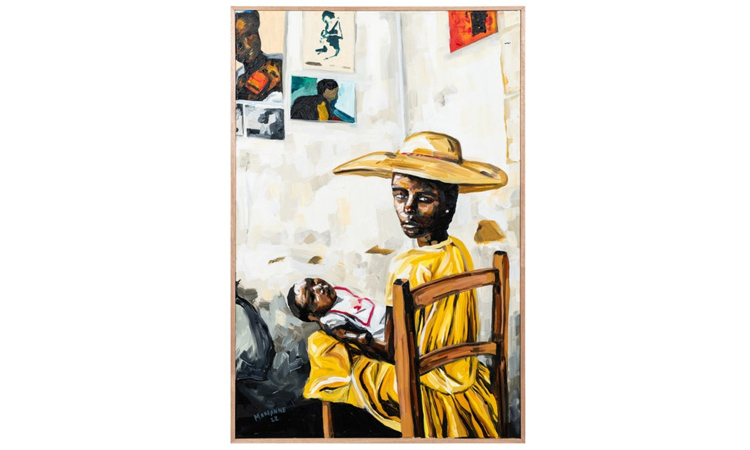 THE amber of flames, the glow of a halo, and the mustard folds of a mother’s dress come alive in the Bellhaus Atelier & Galerie’s ‘Yellow Submarine’.

While patrons may recognise the title from the famous Beatles’ song, Bellhaus curator Marcii Magson decided on the central colour component in homage to her very young daughter, who currently refers to all colours as yellow.

What yellow symbolises or how the colour is used is open to artist interpretation.

In photography by Botha, yellow is the detritus on a bright blue city pool, the colour of a petrol station or of a roaring fire.

Of the submarine, Magson suggests it is a metaphor for the subconscious.

“Everything we apply above ground comes from a deep-rooted inside, and to express it we must go underground,” Magson says, highlighting the particular immersion that occurs during the artistic and creative process.

The results of Magson’s creative prompt are varied and vibrant.

A yellow run exploration of insects by Veldsman, gouche on paper flowers by Basson, and the subtle yet fitting flecks of yellow in Katerere’s striking sculptures of octopi, moving crabs and stone salmon.

More metaphorical is work by Nghidishange, whose ink on Fabriano offerings are existential abstractions that turn the city sideways or float through dark, jagged landscapes.

Also featuring Burger’s monochromatic renderings of the depths of hell and the sea, as well as Louw’s and Chapman’s arresting, character-driven paintings featuring yellow hula hoops and shrouds and speaking of mothers, mindfulness and

quiet struggle, ‘Yellow Submarine’ is an eclectic exhibition in which Dicks leans into the diversity of expression.

Presenting a collection of resin plant sculptures, the frenetic and flurrying lino print ‘Africa Bee’ and the eye-catching inquiry of ‘Is this Utopia?’, Dicks’ multifarious interpretation of the theme also includes a black seed wall hanging and a selection of clay sculptures as she works boldly across various mediums.

Elegantly curated and a strong end to the Bellhaus Atelier & Galerie’s first year, ‘Yellow Submarine’ is an enriching gathering of a crop of talented visual artists, and will be on display until 10 December.