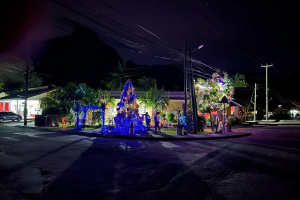 Port Glaud won the top prize with the theme ‘Fishermen’ and its recycled tree is made up of fish traps fixed on a bamboo structure. (Rassin Vannier, Seychelles News Agency)

The recycled Christmas tree of Port Glaud won the title of best decorated district in the annual Seychelles eco-friendly and Do It Yourself Christmas Tree competition organised by the Ministry of Agriculture, Climate Change and Environment.

Initiated in November 2020, the competition seeks to encourage people to use things they have discarded and create aesthetically pleasing Christmas trees.

This competition launched earlier this year was open to schools, homes, districts, the private sector and civil society.

Port Glaud won the top prize with the theme ‘Fishermen’ and its recycled tree is made up of fish traps fixed on a bamboo structure and decorated with buoys and other fishing gear, including Christmas lights. It is situated next to the district’s police station in honour of Port Glaud’s artisanal fishermen.

“We have many artisanal fishermen living in our district, and we have brought them on board for our creation,” said Daniella Bibi, who formed part of the group behind the decoration.

Anse Etoile and Baie St Anne received a shield and SCR5000 ($371) and SCR3000 ($222) sponsored by CWS and a high water pressure cleaner and a hedge trimmer from Seychelles Breweries, respectively.

In the “Business and other organisations” category, the winner was the Anglican Church at Grand Anse Praslin.

While he has always been decorating his church at Grand Anse Praslin, this year Reverend Simon Fred said they decided to take part in the competition and “it was a community effort of around two months to complete the decorations.”

The winner in the school category was Perseverance Secondary School and Carol Charles, the school’s head of ICT and Arts, said that they came out to win the top position they won two years ago when the competition was launched.


The Perseverance School Christmas tree is made up of wooden pallets painted in green and decorated with Christmas lights, old shoes and kitchen utensils among other unused materials from the homes, with plants and live animals such as chickens underneath it.

At the prize giving ceremony, a member of the organising committee, Jeanette Larue, told reporters that “although we have had to fight for attention with the ongoing World Cup, we have seen an improvement in the quality of entries this year.”

She said that the prizes given included items that are practical for people’s everyday use in addition to the cash prizes and shields.

“We are also looking into introducing a category next year where people can make decorations to use on Christmas trees,” said Larue.