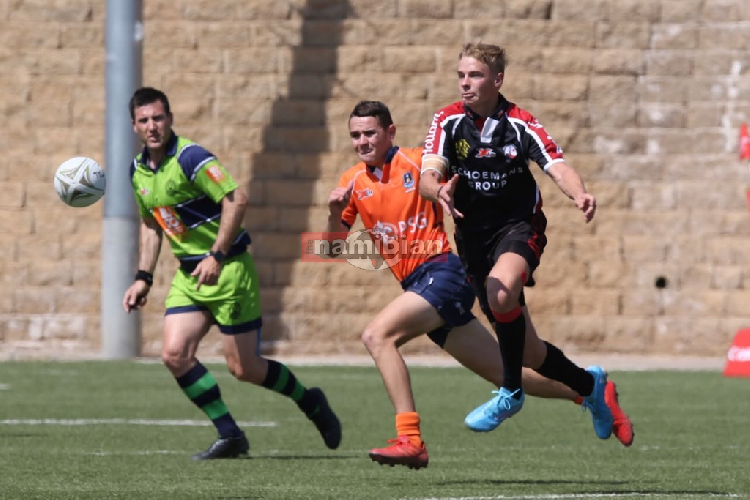 They have now booked their spot in this coming weekend’s semifinals, as did Windhoek Afrikaanse Privaate Skool, who beat Pro Ed Academy 22-0.

Walvis Bay and Moria Private School are also well-placed to reach the semis, after Windhoek High School fell out of contention after not adhering to the competition’s rules.

They fielded an overage player in three recent matches that they won and the competition’s disciplinary committee ruled that WHS must forfeit these points, with the result that they dropped to the bottom of the log and out of contention for a semifinal spot.

In WHS’ absence, Windhoek Gymnasium should be the favourites to win the title, after they had earlier beaten WAP 37-17 and WHS 25-17.

In Saturday’s match, Walvis Bay took a 3-0 lead after a penalty by flyhalf Michael Koopman, but two minutes later Windhoek Gym went 5-3 ahead when scrumhalf Elzandro van Wyk nipped over for a try.

Windhoek Gymnasium started gaining the upper hand in the forward battle and two tries in three minutes by flanker Ruan Agenbag and fullback Divan Steyn put them 17-3 ahead at the half time break.

Agenbag bashed over for his second try from a forward maul early in the second half and when left wing Luhendro de Waal dotted down in the corner after an overlap in the backline, Windhoek Gymnasium had streaked into a 31-3 lead.

Walvis Bay, however, refused to give up and started a great comeback.

Scrumhalf JD Rosseau nipped over from a tap penalty, while eighthman Krynauw Bouwer rounded off a great driving maul with a try, and with Koopman converting both, the deficit had been reduced to 31-17.

The impressive Koopman made another try for Bouwer after launching a fine counterattack and when he added the conversion, they were suddenly in striking distance with the score at 31-24.

Windhoek Gymnasium, however, held on for the win to maintain their unbeaten run in the competition.

Rooster & Co. Is Out-of-Town in the City