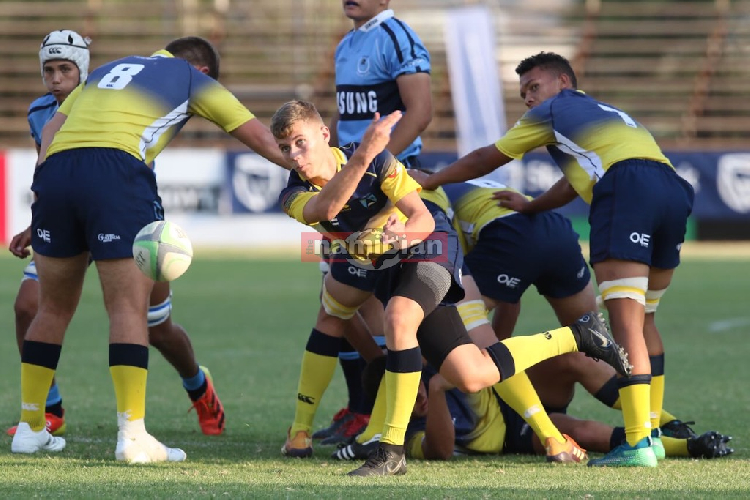 WINDHOEK Gymnasium and Windhoek Afrikaanse Privaat Skool reached the final of the Standard Bank Schools Rugby u19 Super League after contrasting victories in the semifinals over the weekend.

Gymnasium ran in seven tries in an impressive 50-8 victory against Moria Private School, while WAP (Affies) managed to repel a late WHS onslaught to beat them 21-20 in a close encounter.

On Friday night, Windhoek Gymnasium took a while to subdue a spirited Moria side, but their all-round dominance and a fine kicking display by flyhalf JW Visagie, who added 15 points with the boot, gave them a commanding victory.

Left wing Luhendro de Waal opened their account with a converted try after 10 minutes, but a penalty by Moria fullback Tolley Tjipute made it 7-3.

Gymnasium, however, immediately struck back with a second try by De Waal after a fine break by Visagie, who soon added a penalty, and when scrumhalf Elzandre van Wyk rounded off an attack by right wing Surami Kambombo they took a 24-3 lead at the half time break.

Gymnasium centre William Klazen dotted down early in the second half with Visagie converting, but despite trailing 31-3, Moria tried hard to get back in the game.

Handling errors, however, nullified some promising attacks, and after soaking up the pressure, Gymnasium flanker Ruan Agenbag went over from a driving maul to stretch their lead to 36-3.

A great try by fullback Divan Steyn after fine inter-play with Rivaldo Diergaardt put Gymnasium 43-3 ahead, before Moria finally scored their first try, as scrumhalf Coenraad van Zyl cut through the defence to dot down.

Gymnasium, however, had the final say when Kambombo received an inside pass to cut through the backline and with Visagie adding the conversion, they completed a rousing 50-8 win.

Saturday’s encounter between the defending champions Affies and WHS was a much closer affair, with Affies’ more disciplined display and superior goal-kicking giving them the win.

WHS took a 5-0 lead when right wing Jurgen Meyer went over in the corner after a quick backline attack, and when he went over for his second try following a fine counterattack by centre Armand Kotze, WHS went 10-0 ahead. Fyhalf Caeden Moller, however, missed both kicks, which cost them dearly in the end.

Affies opened their account when hooker Delano van den Berg crashed over and with fullback Andre Siepker adding the conversion they closed the gap to 10-7 at the halftime break.

Affies went ahead for the first time when eighthman Heinrich Geldenhuys went over for a converted try early in the second half, while WHS indiscipline saw Affies pulling further away, as Siepker added three more penalties to put Affies 21-13 ahead.

WHS struck back with a late try by substitute forward Henry Otto, converted by Moller, but it was not enough, as Affies held on for a single-point victory.

Affies and Windhoek Gymnasium will now meet in the u19 Super League final next Saturday.