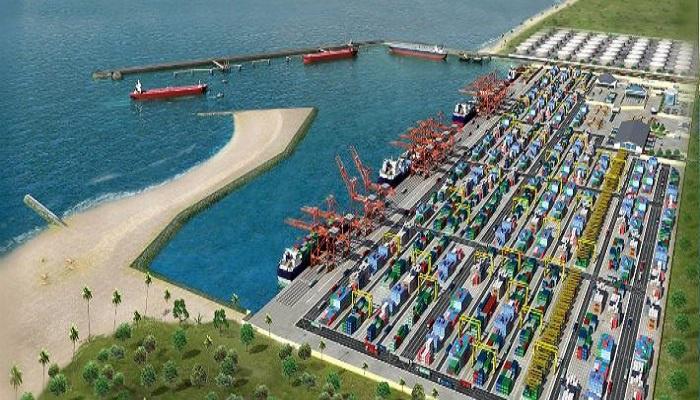 The 90-hectare port promises to secure a better future for Nigeria’s economy.

Designed to handle 2.7 million 20-foot container units per year, the 90-hectare site with a 1.2-kilometer wharf aims to solve Lagos’ storage issue as the need for more space increases. It is currently the largest seaport in Nigeria and one of the biggest in West Africa. It will be expanded to handle approximately 6 million TEU containers and large volumes of liquid and dry bulk non-containerized cargo. Financed by private investors and a consortium of banks, the port is projected to be done in 2023 and fully operational within the year’s first half.

Lekki Port’s neighbour, the Dangote Petroleum Refinery, will process 650,000 barrels of oil daily upon completion, making it the largest single-train refinery in the world. The high-complexity refinery is said to be more complex than most refineries in the United States. The refinery is supplied with crude oil by the most extensive subsea pipeline infrastructure globally (1,100 km long) and will provide 135,000 permanent jobs in the region.

The Lekki Free Zone’s objectives include creating a global economic hub and stimulating Nigeria’s economy by attracting local and foreign investors. The Lekki Port will also play a significant role in advancing Nigeria’s financial future. According to The Minister of Transportation, Rt. Hon. Chibuike Rotimi Amaechi, the port, is projected to generate 360 billion dollars in the next 45 years. In addition, the new establishment will create almost 17,000 employment opportunities and grow Nigeria’s economy by 3.2% by 2024.

“This is the first seaport in Nigeria,” the Minister stated. “What we had all these while are river ports, the tincan is a river port, the Apapa is a river port and Port Harcourt. Right here, you have 16.5 metres depth which is good for the country, but the country needs more than just one of these ports because of the increase in commercial activities in the future.”

A new prospective project – a deep seaport in Bonny- awaits approval, which could be granted around May 2023. The managing director Nigerian Ports Authority (NPA), Mohammed Bello Koko, recently revealed that a proposal for the construction has been drawn and that preliminary processes have started to establish the port.

Why African Countries Owe So Much Money to Foreign Airlines | The African Exponent.