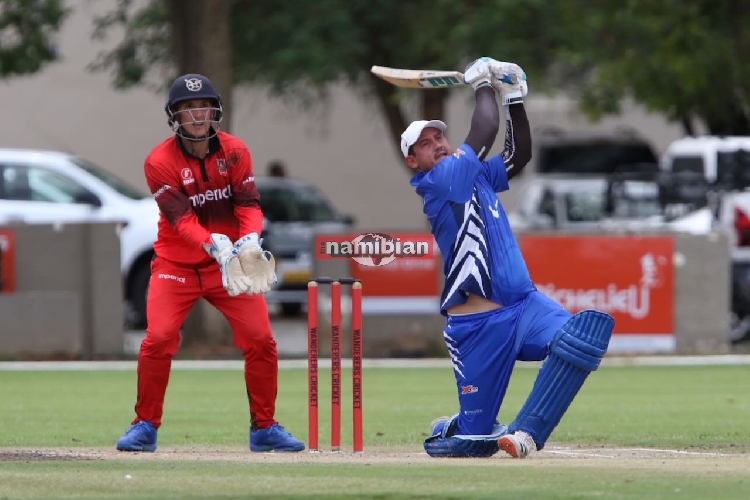 CRICKET Namibia’s 50-over Premier League is developing into a fascinating title race after Wanderers regained the lead with an emphatic 9-wicket victory against Trustco United on Saturday.

The previous weekend Wanderers were outplayed by WHS Old Boys, who went to the top of the log after their 5-wicket victory, but on Saturday, Wanderers reclaimed top spot with a commanding all-round performance.

With the league now just over the halfway stage, Wanderers and Old Boys are both on 16 points, with Wanderers leading on a slightly better run rate.

Saturday’s other scheduled match between CCD and MR24/7 Welwitschia was postponed due to a wet pitch, which leaves CCD third on the log on eight points, but with two matches in hand on the leaders.

Saturday’s match at Wanderers was also affected by overnight rain, and after a late start was reduced to 36 overs each.

After being sent in to bat, United were all out for 154 off 35,5 overs, while Wanderers comfortably reached 155/1 with 14 overs still in hand.

In United’s innings, Hendrik van der Walt was dismissed early on, bowled by Karl Birkenstock for one, but Henry Hayes and Michael van Lingen steadied the ship with a 24-run partnership before Van Lingen was bowled by Nyasha Nyashadzaishe for 17.

United captain Chris Freeman was out for five, caught off Hansie de Villiers’ bowling, but Hayes stepped up his attack with some boundaries before being clean bowled by Dewald Nel for 38 off 50 balls (5×4, 1×6). When Damon Coetzee followed shortly after, bowled by Bernard Scholtz for 16, United were struggling at 89/5, but Handre Klazinga revived United’s fortunes with a spirited knock.

He didn’t receive much support from United’s lower-order batters, with wickets falling regularly at the other end, but he managed to steer United to a respectable total, and when he was last man out, United had recovered to set Wanderers a competitive winning target of 155.

Scholtz, however, managed to pick up two wickets for 33 runs off eight overs, while Birkenstock (2/25) and Nyashadzaishe (2/22) also took two wickets each.

In Wanderers’ innings, Niko Davin and Lohan Louwrens, got off to a strong start with an opening stand of 73 runs off 10 overs.

Davin was the early aggressor, hitting Dickson Vambe for three fours and a six, and Melrych Robyn for two sixes and a four, and by the seventh over he reached his 50 with another boundary off Klazinga.

Michael van Lingen finally got the breakthrough, dismissing Davin for 56 (off 43 balls, 5×4, 3×6), but with the total on 73, Wanderers were well on their way.

Louwrens was more circumspect, but gradually took control, and when he hit Freeman for three consecutive fours in the 19th over, Wanderers were cruising at 129/1.

Three over later, Louwrens finished off in style with a six and a four off Van Lingen as Wanderers reached the winning target off only 21,4 overs.

Louwrens remained not out on 79 off 60 balls (9×4, 1×6) and dominated an unbeaten second wicket partnership of 82 runs with Michau du Preez, with the latter contributing a mere 9 runs.

It was United’s fifth defeat in six matches and they remain bottom of the log on four points with Welwitschia.