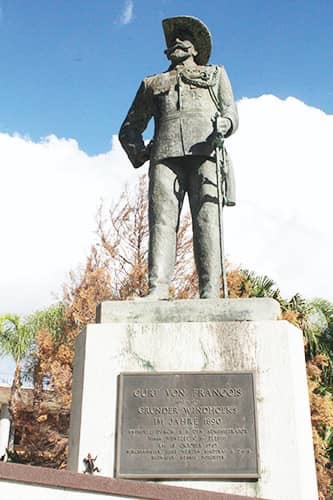 THE controversial statue of German colonial military officer Curt von François will be removed from its pedestal in front of the City of Windhoek’s head office on Wednesday.

City of Windhoek spokesperson Lydia Amutenya confirmed this on Monday.

This move was welcomed by activists of the group ‘A Curt Farewell’, which has been advocating the removal of the statue.

outside the Windhoek municipal building at the intersection of Independence Avenue and Sam Nujoma Drive. The statue was unveiled in October 1965, during the 75-year anniversary celebration of the founding of Windhoek under German colonial rule.

Von François was stationed in the new German colony of South West Africa as an officer of the Schutztruppe from 1889 to 1894.

In 1892, he commanded an attack on a settlement of people led by Nama kaptein Hendrik Witbooi at Hornkranz west of Rehoboth, during which women and children were killed – an event that has continued to severely damage his reputation