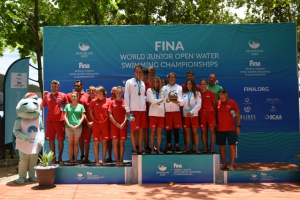 (Seychelles News Agency) – Swimmers from the United States and Hungary dominated the 2022 World Junior Open Water Swimming Championships, held in Seychelles for the first time over the weekend.

The two nations shared a total of eight gold medals available equally between them, with each taking home four gold medals.

Hungary was awarded the trophy as the best team of the tournament.

The event took from September 16-18 at the place at the popular northern Mahe beach of Beau Vallon.

In the first race on Friday for the boys, 14-15 years covering 5km race, Nathan Szobota from the USA finished first, edging out Italian Davide Grossi. Szobota’s time was 48 minutes 50.9 seconds while Grossi finished the race in 48 minutes 51.0 seconds, showing just how close the two were.

The only Seychellois swimmer in that race was Thierry Payet who ended the race in 29th place out of the 35 swimmers in 56 minutes 59.1 seconds.

On the girls’ side, American swimmer Claire Weinstein crossed the finishing line in 51 minutes 52.40 seconds. Behind her was Turkey’s Tuna Erdogan and third place went to Noa Martin of Spain.


After the opening races, it was time for the race of the 16-17-year-old covering 7.5km. America swimmer Katie Grimes came out first far ahead of the other swimmers in 1 hour 22 minutes 38.50 seconds.

In the boys’ category, Hungarian Hunor Kovacs-Seres ended the race in the first place, in 1 hour 16 minutes 2.10 seconds. He was followed by Mexican Paulo Strehlke-Delgado and third was another swimmer from Hungary, Mate Hartman.

For the 10km races on Saturday for 18-19 years old, Hungary dominated Bettina Fabian winning gold for the girls in 2 hours 3 minutes 11.40 seconds ahead of Candela Sanchez Lora of Spain. In third place was Hungarian, Mira Szimcsak.

For the boys, Hungarian, David Betlehem was the first to cross the line, with a time of 1 hour 53:10.30, followed by two Italians, Pasquale Giordano and Guiseppe Ilaria.

For Seychelles, Damien Payet competed in this race and came out in 24th place out of the 35 swimmers in 2 hours 4 minutes 22.60.

“It was a bit rough, but I think it was a good race,” said Payet, before adding; “I trained hard for this and I am proud of my performance today.”

Germany was in the second place followed by Turkey.

“It was not an easy race as we had to change the race strategy since we had already competed in the 5km and 7.5km races, so we needed a plan to ensure we got the best time,” said a representative of the U.S team.

“It was really great and we enjoy it as we have been doing it for five years now, so it was a fun race,” said David Betlehem of the Hungary team.

Meanwhile, FINA has said that they think the competition has gone really well, with a high level of results from the swimmers.

“In terms of the organisation, it has been good to be able to come to the Seychelles, where we have been made very welcome and overall it has gone very well,” said John West, the honorary secretary of the FINA Open Water, who added that Seychelles will be given priority in the future, should the country decide to bid to host the tournament again.