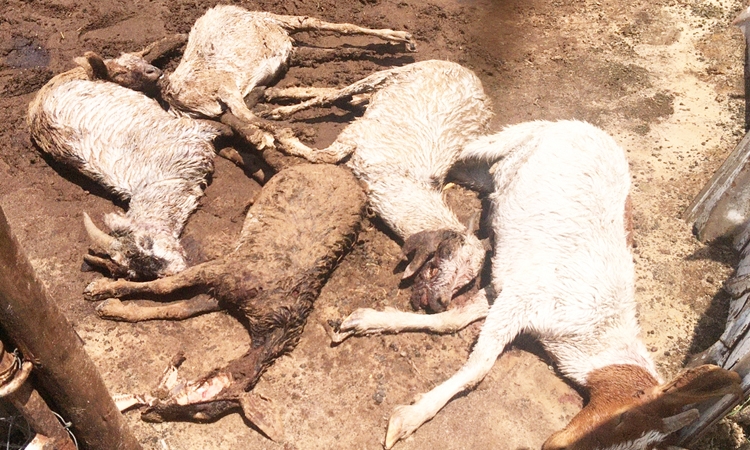 OLGA Selestinus from Otuwala village in the Oshana region woke up yesterday morning to find some of her goats dead after being attacked by unknown animals.

Selestinus had 12 goats in her kraal. Five died in one night, while six are badly injured and about to die.

When The Namibian visited the scene, one of the dead goats had no head, while others had open wounds, with no eyes and jaws.

The injured goats also had open wounds on their heads, some with no eyes and torn ears, looking pale and breathing heavily.

One goat was missing.

“My dog was also killed. I lost all my goats. Eight of them were pregnant. I lost a lot,” she said.

Selestinus said the incident happened at around 03h43 yesterday morning.

“I just heard the dogs barking loudly. I woke up and peeped through the window but I saw nothing. I just heard my goats bleating. Lastly, I realised that my dog was not barking anymore.”

At around 05h00 she got up to prepare the children for school and check what happened to the goats, which is when she made the grisly discovery.

“This is my first time seeing an incident of this nature. I have been in this village for seven years,” said Selestinus, who now has to start all over again with a new herd of goats.

“These creatures have paws and their paw sizes are different. I suspect they are three. We will not eat these goats, we have to destroy them all. Some goats are pale and have lost blood and will eventually die. Their wounds are not bleeding,” Selestinus said.

When they put the goats in the kraal on Sunday evening, they locked the kraal entrance but were surprised to find the kraal gate open in the morning, she said.

“I don’t know who opened the gate. They even sucked the blood out of my goats. It’s very scary and dangerous.”

Acting headman of Otuwala village David Nuule said a similar incident occurred at a nearby village some years ago and these strange animals were killed.

“As a community, we will have to inform our traditional office and have a community meeting to discuss this issue,” Nuule said.

They will also wait to hear from the Ministry of Environment, Forestry and Tourism.

“You can’t really say how people must protect their animals at night because they are in the kraals. Sometimes, you might come out and get attacked,” he said.

Otuwala village secretary Gerhard Mangundu, who has been in the village for many years, described the incident as very strange.

“We are scared. These things came from the north-east and came to attack the goats and went back. I suspect there are three because there are different paws,” he said.

Otuwala community member Titus Junias was born at the village, but said he has never seen or heard of such a thing.

“This is really shocking and bad.”

Contacted for a comment, environment ministry spokesperson Romeo Muyunda said when people experience cases of this nature, they must report it to the authorities and the ministry immediately.

“Our officials are trained to identify different wild animals’ paws. They are able to identify whether it’s a cheetah, leopard or a jackal,” Muyunda said.

He said people must not tamper with the evidence but allow the ministry to investigate and assist them.