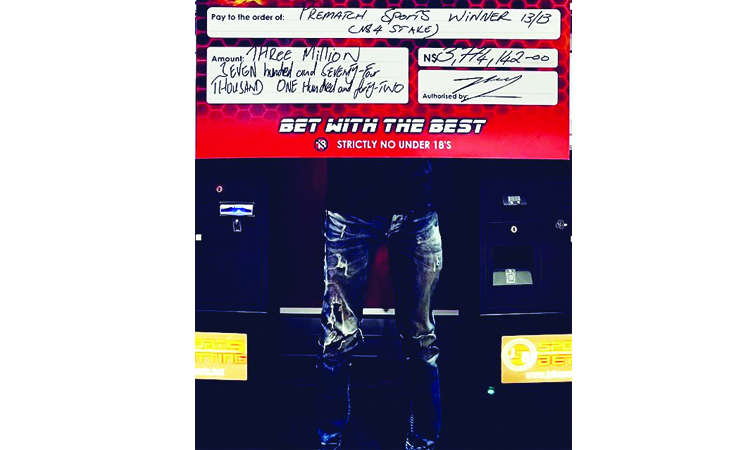 AN unemployed resident of the Havana informal settlement in Windhoek became an overnight millionaire this weekend after winning N$3,7 million in a sport bet.

The Liverpool supporter, whose name is being withheld to protect him, used his last N$4 to fill in a Soccer 13 form through which he also bet against his team during its premier league match against Leeds United on Saturday.

Soccer 13 jackpots are pools in which betters predict the result of 13 English Premier League and English Championship (formerly known as the First Division) matches.

According to JSB Sports Betting head of operations and customer care Jevon Wilson, the 39-year-old man is a regular at a gambling establishment at Ausspann­platz in the capital.

“He constantly plays with JSB Sports Betting and dreams big. On the brink of giving up, he used his last N$4 to play, and then it was up to God.

“He didn’t sleep that night, and prayed the entire night. God answered his prayers,” Wilson says.

Upon meeting with the JSB team yesterday morning with the news of his win, the man was unable to contain his excitement.

“This is a life-changing moment for him, and we are very happy for him,” Wilson yesterday said.

He said the JSB management will be assisting the winner in his transition from unemployment to instant millionaire by ensuring he finds counselling and financial advice.

The N$3,7 million is the biggest single payout recorded at JSB yet, and is not tax deductible.

Wilson said the weekend saw a total payout of over N$5,4 million in store and online betting at JSB Sports Betting.

He said anyone stands a chance to become an instant millionaire by simply selecting the correct outcome of 13 soccer matches.

“The usual Saturday total at JSB is an average payout of about N$2 million for the first division, and if you are the one to get it right, you can walk away with a whopping N$10 million, but there are also consolation prizes if you get 10, 11 or 12 correct.

“We offer similar chances every Thursday and Sunday,” Wilson said.

The spokesperson of the Namibia Revenue Agency, Tonateni Shidhudhu, said winnings from gambling are only taxable if a person regularly bets and uses it as a source of income. “However, if the winning was just out of the blue and is not a regular activity, such winning could be held as capital in nature and hence not taxable,” Shidhudhu said.

Undocumented people will not be deported – Kashikola