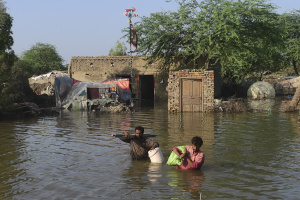 Flood affected people carry belongings out from their flooded home in Shikarpur, Sindh province, on August 31, 2022. Aid efforts ramped up across flooded Pakistan on August 30 to help tens of millions of people affected by relentless monsoon rains that have submerged a third of the country and claimed more than 1,100 lives. (Photo by Asif HASSAN / AFP)

(AFP) – The United Nations and Pakistan launched an emergency appeal for $160 million on Tuesday as the country was submerged by floods, with the United States quickly offering $30 million.

The funds will provide 5.2 million of the worst-affected and most vulnerable people with aid including food, clean water, sanitation and emergency education, UN Secretary General Antonio Guterres said, calling the disaster a “colossal crisis”.

“Pakistan is awash in suffering. The Pakistani people are facing a monsoon on steroids — the relentless impact of epochal levels of rain and flooding,” he said in a video statement before announcing plans to visit Pakistan next week.

The United States, the largest donor to Pakistan, said it was providing a fresh $30 million for urgent needs including food, safe water and hygiene.

The US Agency for International Development in a statement announcing the aid said that one of its disaster specialists was working out of Islamabad to assess needs and coordinate with the Pakistani government and other local partners.

The United Nations said the aid would cover the initial six months of the crisis response and help to avoid outbreaks of diseases such as cholera, as well as providing nutrition to young children and their mothers.

It will also provide assistance to refugees and facilitate schemes to reunite families separated by the disaster.

He said some 500,000 people displaced by the floods were sheltering in relief camps, with many more temporarily staying with host families.

Around 150 bridges have been washed away, he said, and 3,500 kilometres (2,175 miles) of roads damaged in flooding and landslides, hampering access.

“The heavy rains are forecast to continue and with many dams and rivers already at flood levels, the flooding is likely to get worse before it gets better,” Laerke said.

Tens of millions of people have been affected by relentless monsoon rains that have submerged a third of Pakistan and claimed more than 1,100 lives.

The rains that began in June have unleashed the worst flooding in more than a decade, washing away swathes of vital crops and damaging or destroying more than a million homes.

He said there was already a vast disparity between rural and urban healthcare provision, while treatment for non-communicable diseases such as diabetes would be “severely” impacted.

“It’s a vast problem which opens up here,” he said.

The UN refugee agency said there were 1.3 million Afghan refugees registered in Pakistan and it had already delivered $1.5 million worth of emergency relief and shelter items — but “much, much more” would be needed in the coming weeks.

Guterres branded the floods a “climate catastrophe”, saying South Asia was one of the world’s hotspots where people are “15 times more likely to die from climate impacts”.

“It is outrageous that climate action is being put on the back burner as global emissions of greenhouse gases are still rising, putting all of us — everywhere — in growing danger,” he said.

The UN’s World Meteorological Organization said that Pakistan and northwest India have been witnessing an intense 2022 monsoon season.

One site at Padidan in the southern Sindh province was reporting 1,288 millimetres of rain so far in August, compared to the monthly average of 46 millimetres, said WMO spokeswoman Clare Nullis.