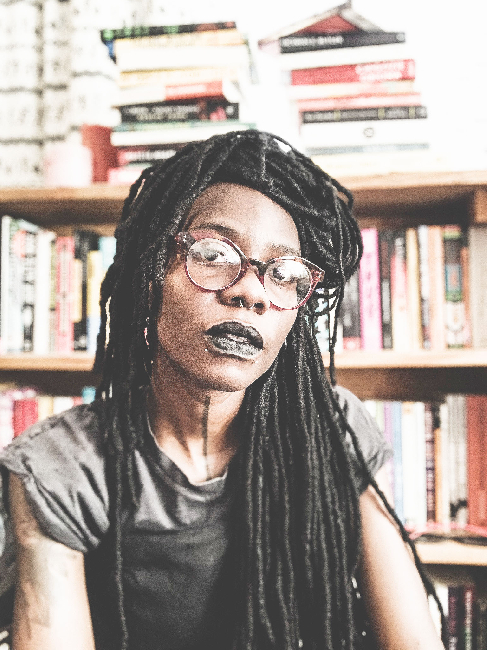 IT’S immediately clear after just reading the introduction to Masiyaleti Mbewe’s ‘Kin’ that the Zambian-born writer is not only incredibly talented, but also able to craft an otherworldly tale that transports readers through space and time.

The short story featured in ‘Disruption’ and was published by Short Story Day Africa (SSDA) and Catalyst Press in September 2021.

In ‘Kin’, Mbewe weaves an Afrofuturistic narrative that imagines what lies beyond earth, but also harks back to what Mbewe describes as “the dark times”.

Mbewe grew up in Botswana and moved to Namibia in 2010 to study media and English at the University of Namibia (Unam). She previously worked as copywriter, but says there was something “soul crushing” about her stint in advertising.

“The corporate world is cold and very racist, and I was incredibly aware of all the micro-aggression and outright aggression, so I had a very difficult time trying to navigate those spaces,” she says.

Mbewe eventually quit and went back to Unam to get a master’s degree in English.

She currently works independently as a freelance culture writer, covering the African perspective and how it fits into pop-culture commentary.

“Elements of language, cultural exchange and the representation of black queer people in Afrofuturism are heavy themes in the work,” Mbewe says.

She describes herself as a queer futurist writer and photographer.

In 2021, the TEDx alumna was selected as one of nine writers in residence at The Goethe-Institut/ Bureau de liaison African writer’s residency in Burkina Faso.

In ‘Kin’, Mbewe creates a motley crew of characters that have become sisters under Machine, their creator.

“The characters are from the novels ‘Sula’, ‘Song of Solomon’, ‘Beloved’ and ‘The Bluest Eye’.

“In a way, the characters from these novels sort of followed me around because I read the novels one after the other in a short period of time.”

Together, the sisters travel the planets conducting extractions until a chant in an unplaceable language calls from the beyond.

The narrator embodies the dead bones she sees floating through the water, like “a ghost returning from the dead” before being “baptised into chaos”.

“I could hear the snarls and splatter of dogs behind me and the strange tepid slithering of the word ‘kaffir!’”

Somehow, Sula understands what the word apartheid means even though no one has ever told her.

“There was a history in my borrowed body fighting for space in my head.

“Every night past the hours empty of gods, the white things would return as shards and rip apart the women they had chosen to devour.”

CONTRIBUTING TO THE CANON

‘Kin’ was inspired by Octavia Butler’s widely popular ‘Kindred’ and the 1993 film ‘Sankofa’, as well as the anime TV series ‘Cowboy Bebop’.

“I think I had this terribly frightening story about time travel to tell. In the sense that for black people, this spiritual upheaval from one timeline to another would have devastating racial implications.

“I wanted to contribute something particularly African about this concept to the existing canon of films and stories.”

Her writing has always been aligned with exploring the otherworldly or subverting the stereotypical placement of African literature, she says.

Mbewe honed her writing talent through her relationships with other writers.

“I really value editing. I think that’s where the magic happens. Before I understood the editing process, I went into a writing session determined to write a masterpiece in one go, and because that’s not how writing works, I’d be incredibly frustrated and give up on a story.

“Getting the first draft of a story down is just the first step, you have to purge your ideas (good and bad) on the page, and then work from there.”

“I had just left a mental health hospital and was diagnosed with borderline personality disorder, major depressive disorder, I had a substance abuse problem, and I had just left a very bad relationship. It was the first story I wrote and finished after my diagnosis and years of artistic stagnancy.”

As part of her creative process, Mbewe aims to write for two hours a day.

“I have an outline of the story that I break down scene by scene, and I have keywords and themes I try to engage based on the outline.

“Sometimes when the words just come, I jump out of bed, grab my phone and type on the notes app,” she says.

After submitting to SSDA on and off for years, Mbewe instinctively felt there was something different about ‘Kin’.

The pandemic happened and she forgot all about it until one day she was woken from an all-nighter by a congratulatory text from writer and friend Efemia Chela.

“I feel really honoured to have been a part of this particular volume of work.

“The SSDA team is very passionate about African literature. I walked away affirmed.”

Mbewe is currently working on a novel, however, she believes online platforms need to be more receptive to perspectives on the continent.

“There is a huge reluctance to engage us, because no one really thinks our take on pop culture matters or is necessarily relevant. There’s this really palpable hesitancy to platform our work. That said, we need more arts and culture platforms, so we need funding. Writers need funding, we need time to do the work.”