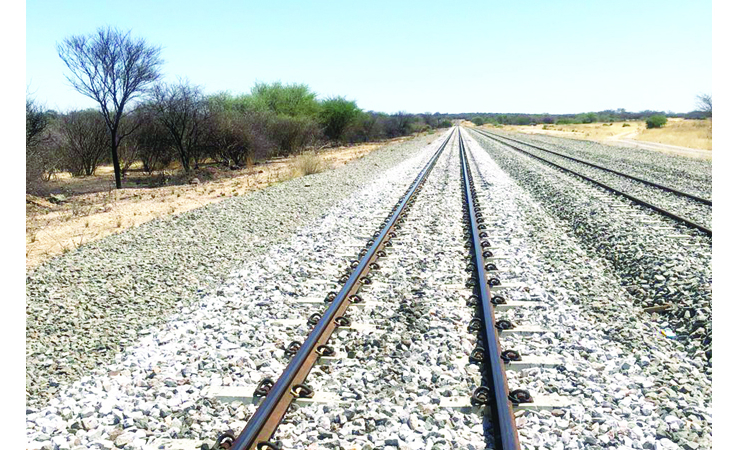 MINISTER of works and transport John Mutorwa over the weekend inspected the upgraded railway between Kranzberg and Tsumeb at Omaruru.

The railway line forms part of the main rail corridor between Walvis Bay and northern Namibia, and links Namibia to Angola, the Democreatic Republic of Congo (DRC), and Zambia.

Mutorwa during the site visit said railway infrastructure is and will remain important in the future.

“The government has taken up to upgrade the existing railway between Tsumeb up to Kranzberg from Walvis Bay to Arandis. If you go there, the activities are on site to upgrade the railway, and we are satisfied with the work they are doing there,” he said.

Mutorwa said the progress on the railway lines should be appreciated.

“We are now connected to our neighbouring countries through the Trans-Kalahari and Trans-Caprivi highways.

“It’s important that we continue with the upgrade and extension of railways, particularly from Grootfontein via Rundu up to Katima, and in the east from Windhoek to Gobabis. That railway line also requires to be upgraded to modern standards,” he said.

Mutorwa said there is an agreement between the governments of Botswana and Namibia to work on the Trans-Kalahari highway.

TransNamib’s chief executive officer, Johny Smith, said the government’s investment in the railway line between Tsumeb and Kranzberg started in 2014, and has already added value to TransNamib’s train operations, and completion of the rehabilitation of the section remains critical for the national railway company to improve its train operations.

“Due to the line not being fully upgraded, about 1 012 broken rails have been recorded over the entire railway section between the Kranzberg and Tsumeb stations.

“This increases the risk for derailment, and therefore continuous maintenance needs to be done to ensure preventative measures provide better management of the line,” he said.

“The complete phases of the railway line between Walvis Bay and northern Namibia still require further rehabilitation, construction and the extension of the existing railway line from Grootfontein to Katima Mulilo to link to Zambia,” Smith said.

According to Smith, 61km of the full section of almost 410km have been fully upgraded, and 328km are partially upgraded to 30kg rails and still requires 48kg rails in order to be fully completed, as well as some reconstruction of certain sections of the line.

“The Walvis Bay-Kranzberg rehabilitation of about 200km is close to completion, which should be done by the end of the first quarter of 2023.

“These upgrades will allow TransNamib to transport more freight on this route through a much safer and faster means of transport, considering the current limitation through speed restrictions on this route,” he said.

Smith said more than 100 heavy trucks are currently moving on the route per day, utilising the Walvis Bay-Lubumabashi Corridor between the Port of Walvis Bay, northern Namibia, Zambia and the DRC.

Leon Steyn, the site manager of the contractors working on the upgrading, D&M Rail Construction, says the ministry has conducted emergency repairs, while the company was busy preparing for the Ondangwa-Oshikango railway.

“We started with repair work in 2011, and in 2013 we were appointed to upgrade. The upgrade is taking the old material away. You take the old rail off and you replace it with new ones,” he says.