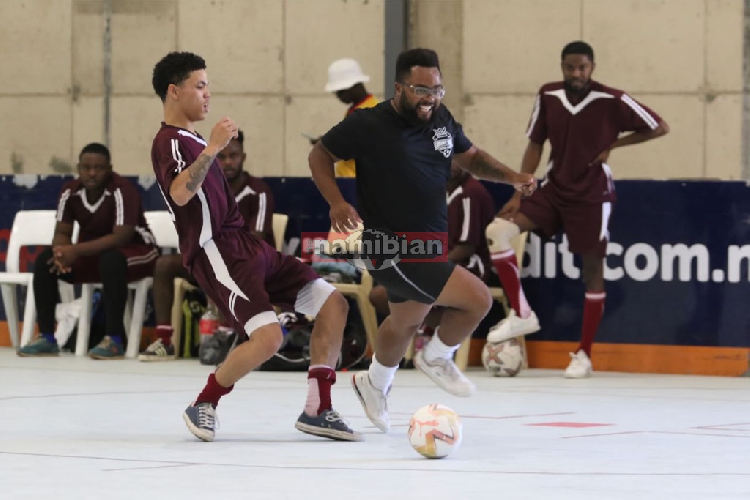 THE title race in the Express Credit Futsal Summer League is still wide open after all the leading contenders in the Men’s Premier League dropped points over the weekend.

The log leaders Patriots went down 6-2 to third-placed Windhoek Futsal Club on Saturday afternoon, although Patriots did manage to pick up a 4-2 win against SBS Trucking a few hours later.

Despite the defeat, Patriots still lead the log, since all of their main title rivals also dropped points.

With the league now nearing the halfway stage, Patriots lead the log on 30 points from 12 matches – four ahead of Chile Futsal, who could not capitalise as they were held to a 2-2 draw by sixth-placed Quality Futsal Club.

Third-placed Windhoek Futsal Club blew hot and cold, as they beat log leaders, Patriots, and Iipumbu FC 5-2, but lost 8-5 to Windhoek Show Society, who are third last on the log, and 6-3 to Ballers FC.

The results see Windhoek FC remaining third on the log on 22 points, although they have two matches in hand on Patriots and Chile Futsal.

The X Men joined Windhoek Futsal Club on 22 points after picking up a point in their 2-2 draw against Chile Futsal.

Ballers are fifth on 21 points, while Quality FC are sixth on 20 points after picking up a comprehensive 9-2 victory against the Mavericks.

In other results over the weekend, Replica and Santastico drew 2-2, and SBS Trucking beat Windhoek Show Society 4-3.

The action in the Men’s First Division, meanwhile, is hotting up as teams battle it out to make the play-offs where the top three teams will be promoted to the Premier League.

In the Men’s First Division Group A, the top two teams, 7Kings FC and City Stars continued to set the pace as they both picked up big victories on Sunday.

Iipumbu Shiimi are now fourth on the log on 10 points, but Samba Boys and Windhoek FC (both on 10) and Jac Motors (9) are all still in with a chance of making the top-four playoff positions.

The First Division Group B is just as tight with the top eight teams separated by only six points.

Log leaders Minerals FC were held to a 3-3 draw by Ineos Grenadier FC on Saturday, but on Sunday they bounced back with a 5-2 victory against Flying V FC, who also suffered a 7-4 defeat to Luxury Hill FC on Saturday.

Minerals FC now lead the log on 16 points from seven matches, followed by Demia FC on 15 from five matches, while Flying V remain third on 15 points from eight matches, despite their two defeats.

They are followed by Al Noor FC and Basics FC who are both on 13 points, Ineos Grenadier FC on 11, and Justice League FC and Lithon Football Consultants who are both on nine points.