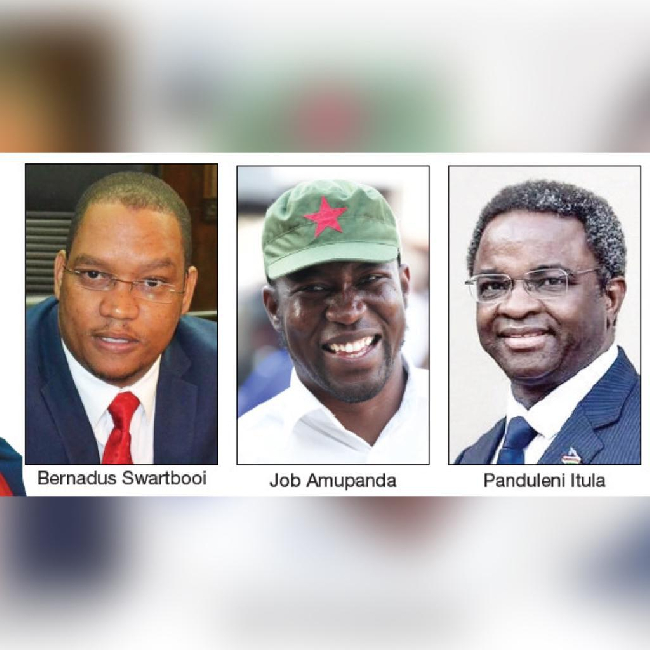 SWAPO vice presidential candidate Netumbo Nandi-Ndaitwah said she will have no problem if the party’s prodigal sons, like Job Amupanda and Bernadus Swartbooi, return to its ranks as they will be welcomed with open arms.

In a wide-ranging interview with The Namibian two weeks ago, she said as a party leader she would not want to lose a single Swapo member.

“It’s like when you have your children in the house, some might get annoyed and disappear the whole year and then when they come back, even the Bible tells us the story of the son who got lost, so we will have no problem,” Nandi-Ndaitwah said.

She was responding to a question about Swapo having lost several youth leaders, such as Amupanda, who started the Affirmative Repositioning (AR) movement, as well as Swartbooi, who also left Swapo and is now leading the Landless People’s Movement.

“As a party leader, I don’t have any problem with anyone who left the party coming back. They will be welcomed. They can start their life with the party and be part of the team that is moving the party forward,” she said.

Nandi-Ndaitwah is one of three candidates nominated for the Swapo vice presidency position, and by implication the party’s 2024 presidential candidate, alongside prime minister Saara Kuugongelwa-Amadhila and environment, forestry and tourism minister Pohamba Shifeta.

She said although people leave for a number of reasons, she is eager to see the party continue to grow.

“Every situation has its own dynamic. Ideally as a party leader, I do not want to lose a single member of the party. I’d want all party members to remain, and more people to join the party,” she said.

“Individuals have different viewpoints and each has a different way of how they want things to be done, but if that does not correspond with what the majority wants and one decides to walk away, what can you do as a leader?”

This past weekend, former health minister Bernard Haufiku told The Namibian that the party should have held onto the young people who left Swapo and formed opposition parties.

“Some, maybe we could not keep them in the party, but there are those that I believe we could have kept in the party. Because of their ideas and building the party’s strength further,” Haufiku said.

NOT A SOLE DECISION

When approached for comment this week, Amupanda said the decisions he makes are no longer about himself.

“There was a time when it was about Job, a time when I didn’t mobilise people around me. A conversation like this is no longer about me but I think about those who are with me,” Amupanda said.

“It’s also about belief systems, programmes in place and visions. I lead young people who are not only affiliated to AR but also in other political parties, some are not even in politics. So, this is a complex matter.”

Already confirmed as one of the presidential candidates is the Independent Patriots for Change leader, Panduleni Itula, with other opposition parties set to have their congresses in the run-up to 2024 elections.

Itula, too, was expelled from Swapo in 2020. In 2019, he ran for the presidential election as an independent candidate. His decision to do so was seen as disruptive behaviour and non acceptance of Swapo’s choice of president, Hage Geingob, as the sole candidate.

Contacted for comment yesterday, Itula said he will never join any group of corrupt people who betrayed the sacrifices of many of his countrymen and women.

This is after The Namibian asked whether he would ever return to Swapo.

“Ask the honourable Netumbo and Sophia, where and who procured the bulletproof jackets they were wearing at the 2017 rigged congress,” he said.

“Ask Netumbo where the money came from for the building of their party head office. Let them demonstrate honesty and transparency before any Namibian citizens can trust them with our dignity. They expelled Itula, Itula will never betray the people of Namibia for any price,” he said.

Itula questioned when Swapo would take responsibility for the horrendous atrocities committed against innocent Namibians at Lubango.

In July 2017, Swartbooi was removed from parliament and resigned from Swapo.

“If I could take out my heart and show you the extent of freedom I feel, and if you could be shown the pictures of how peacefully I sleep after I had been recalled, you will be surprised about my deep sense of happiness,” Swartbooi said when announcing his resignation in 2017.

Questions sent to Swartbooi yesterday went unanswered at the time of going to print.