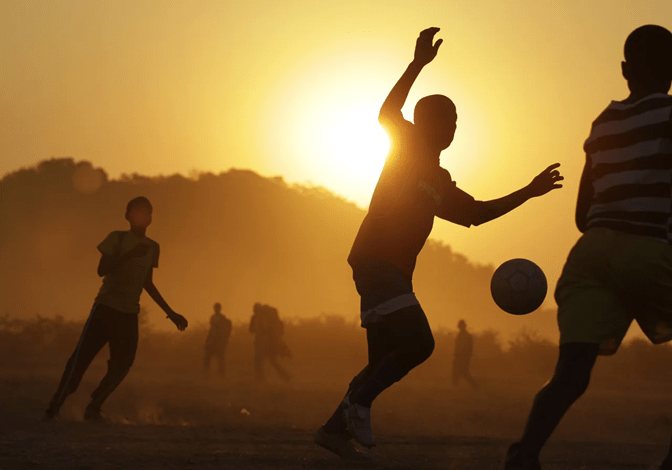 Since Sunday, billions of people all over the world have turned their attention to Qatar, the host of the 2022 FIFA World Cup, whether their countries are participating or not. The excitement and fare associated with football is unmatched, which makes it easy to neglect the more sinister occurrences during peak football seasons: surges in domestic violence, dirty politics, and more recently, a troubling rise in human trafficking of young African football players.

The Central Mediterranean route is not only popular for sex trafficking to Europe. Many players from West and Central Africa are increasingly embarking on dangerous journeys through North Africa to Europe, where they are sold lofty dreams of superstardom. In the quest to become the next Sadio Mané or Didier Drogba, the young players, usually naïve teenagers, are subjected to appalling conditions while trying to illegally cross the Mediterranean sea. Some of them don’t even make it to the other side of the sea.

The football trafficking network has become one of the fastest-growing human trafficking networks in the past decade. In 2015, it was estimated that at least 15,000 young West African players were trafficked yearly, and this number has only grown since then.

Phony agents get in touch with young players and promise them trials or even contracts with European clubs. Worse still, some officials in European embassies are on it, providing valid visas for them to travel. It is when they get to the European countries that they ruefully realise that the agents have left them stranded.

In an exclusive with France 24 in 2019, a former victim, Ivorian footballer Lamine Touré recounted his experience with acquaintances who claimed they were agents from Italy.

“They told me to go over there, to get there by any means, that they will help me become a top player. And seeing how much our family suffers, I felt forced to accept the offer.”

Once he was convinced, he paid the contacts €1,500 and then made arrangements with smugglers who took him across the Sahara Desert, through Libya, to board a boat set for Europe.

“We were out at sea for 2 days, with nothing to drink, nothing to eat. 2 people died on our boat then I ended up back in Libya and found myself in prison. I stayed in prison for 7 months. I was beaten, they demanded money, they tortured me,” narrated Touré.

He was eventually released after his local Ivorian football team president paid the ransom the Libyan jailers demanded.

Most players who have embarked on that journey have not been so lucky.

Another destination for ambitious young African players is Asia. In 2015, BBC reported that 23 underage African players – as young as 14 – were trafficked to Laos and forced to sign harsh contracts.

Another Path to Stardom: The North African Club Appeal

The latest scheme is promised contracts to play for local clubs in North African countries.

North African clubs are attractive to West and Central African players because they are believed to be a good launch pad for advancement into the big European leagues, as the former often sell players to European clubs. The North African clubs also offer better pay and benefits compared to clubs in the players’ home countries. Moreover, the standard of football played in North African clubs is said to be higher, so it gives players from the other regions a chance to brush up on their skills.

Some footballers pay phony agents at least €1,000 to secure a spot in big football clubs in Tunisia, one of which is Espérance Sportive de Tunis. When they get to Tunisia and spend weeks or even months waiting for a no-show contract, they realise they have been hoodwinked and it is already too late.

At that point, they have no valid opportunity to remain in Tunisia, but still stay because they have no money to go back home. They are then forced to take odd jobs in order to make ends meet and save up to pay their overstay fines and buy return tickets. Similar cases are also rampant in Morocco.

Some players who are stranded in North Africa then opt to take the Central Mediterranean route to Europe, where they hope to make the football trials of renowned clubs.

The prevalence of the North African club pipeline is a big deviation from what was the norm in the 2000’s, when players from other West African countries would travel to Ghana in the hopes of securing Ghanaian passports. Back then, Ghana was a hotspot for foreign agents to scout stellar players, the foremost examples being Michael Essien and Stephen Appiah. Although, even then, exploitation of young players was rife as numerous illegal football academies sprung up and promised contracts to desperate players for hefty sums of money.

A number of industry experts have called for African federations to be more transparent with recruitment procedures for young footballers. Some of the major ways they hope this would be achieved is the publishing of the names of official agents, as well as aggressive sensitisation through the media.

The hope is that as more light is shed on the football trafficking issue, the relevant authorities will spring to action and put an end to it.

Here is why Afrobeats is Dominating the Global Music Scene | The African Exponent.

How Much Does Sports Car Insurance Cost? | The African Exponent.

All African World Cup-Bound Teams Will be Managed by Local Coaches | The African Exponent.