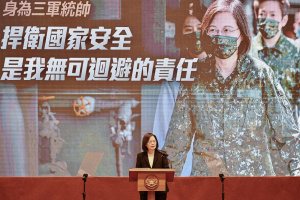 Taiwan’s President Tsai Ing-wen speaks during a press conference at the presidential office in Taipei on December 27, 2022. Taiwan’s President Tsai Ing-wen announced on December 27, 2022 an extension in mandatory military service from four months to one year, saying the island needs to prepare for the increasing threat from China. (Photo by Sam Yeh / AFP)

(AFP) – Taiwan on Tuesday announced an extension in mandatory military service from four months to one year, citing the threat from an increasingly hostile China.

Beijing considers self-ruled, democratic Taiwan a part of its territory, to be taken one day, by force if necessary, and the island lives under the constant fear of a Chinese invasion.

China‘s sabre-rattling has intensified in recent years under President Xi Jinping, and Russia’s invasion of Ukraine has further deepened worries in Taiwan that Beijing might move similarly to annex the island.

China‘s “intimidation and threats against Taiwan are getting more obvious”, President Tsai Ing-wen told a press conference after a high-level government meeting on national security.

“No one wants war… but my fellow countrymen, peace will not fall from the sky.”

The extended requirement will apply to men born after January 1, 2005, Tsai added.

Mandatory service used to be deeply unpopular in Taiwan, and its previous government had reduced it from one year to four months with the aim of creating a mainly volunteer force.

But recent polling showed more than three-quarters of the Taiwanese public now believes that is too short.

Tsai described the extension as “an extremely difficult decision… to ensure the democratic way of life for our future generations”.

“We can only avoid a war by preparing for a war and we can only stop a war by being capable of fighting a war.”

The prospect of a Chinese invasion has increasingly worried Western nations and many of China‘s neighbours.

Xi, China‘s most authoritarian leader in decades, has made clear that what he calls the “reunification” of Taiwan cannot be passed on to future generations.

Taiwan and China split at the end of the Chinese Civil War in 1949, and Tsai has said becoming a part of China is not acceptable to the people of the island.

Taiwan is a mountainous island and would present a formidable challenge to an invading force, but it is massively outgunned with 89,000 ground forces compared with China‘s one million, according to a Pentagon estimate released last month.

Beijing also has a huge advantage in military equipment.

Taiwan has stepped up reservist training and increased its purchases of warplanes and anti-ship missiles to bolster its defences. But experts have said that is not enough.

“Given the threat level and the example of Russia in Ukraine, I hope the Taiwanese public realises that such measures are needed,” he told AFP.

“The threat that Taiwan faces is just as existential.”

The military service announcement on Tuesday came two days after Chinese military exercises near Taiwan, which were held in response to what Beijing described as “provocations” and “collusion” between Washington and Taipei.

Johnson returns to UK as Sunak qualifies for PM race