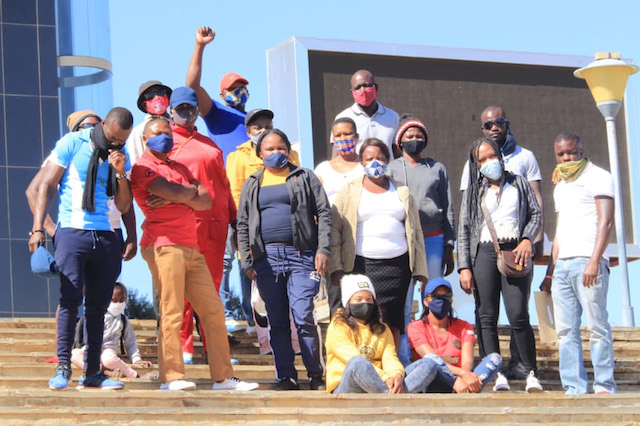 A GROUP of ‘struggle kids’ living at Ndilimani farm at Brakwater have shared their grievances after years of receiving no help from the government.

At least 70 people staying in old tents were relocated in 2015 and allegedly promised jobs after camping at what is now the premises of the Swapo headquarters in Windhoek.

Johannes Tuhafeni, who was born in exile, said the government made them many promises which have not materialised eight years later.

“From 2015 until now we don’t have anything. We have been scammed by the party of Swapo, when Mbumba was the general secretary. He relocated us from where they are building the Swapo building to come here at the farm. He promised us jobs but until now we are unemployed,” he said.

They are tired of empty promises, Tuhafeni asserted.

“Our kids are being born in poverty and we are unable to feed ourselves and our kids. How can we trust our government? We are not happy, we are heartbroken,” he said.

He lamented the fact that 32 years after independence they are still living in the bush in old tents.

“We want the government to start employing people like they used to do before. We have not gained anything under the Swapo government and we are tired of waiting.

Meriam Shishiveni said Mbumba relocated them and promised them food and jobs but until today nothing has been done.

“We are sleeping in tents, getting rained on and bitten by snakes and scorpions. The government has not done anything. Not even clinics or schools are nearby.

“We want to ask Mbumba, where are the jobs he promised us?”

Shishiveni said they have been writing letters to different offices in search of answers but their efforts have been in vain.

The “kids” now have small gardens where they plant maize and tomatoes to sell to sustain themselves.

“We apply for jobs [but] as soon as they read Angola or anything related to war, they dump your applications.

“They told us the Namibian Defence Force was to recruit the struggle kids, but it has not happened,” she said.

The group representative from Ndilimani farm Albertina Ekandjo begged the government to have mercy on them and fulfil their promises.

“We have been here for a long time now with no jobs and no food. We wrote letters to different offices for help, the Office of the President, Swapo, but no answers.

“We want to come out of these bushes and if nothing is being done until the elections, we will not vote,” she said.

Ekandjo said their children need to attend school, but there are no nearby schools.

“When they brought us here, they told us there would be a kitchen. They only gave us food for two months in 2015 and left,” she said.

Aina Shikongo, who also stays at the farm, said the government gave them no solutions, only problems.

“Where they brought us there’s no hospital, no school, no toilets. We use the bushes and sleep in old tents.

“Why did they give us, empty promises?”

Shikongo said they feel like they are enemies of the country as nobody wants to employ them.

“As soon as they read Angola on your documents, there is no job for you.

“They will be celebrating Independence Day – why, if not all of us are independent, even after our parents died fighting for this country?”

Shikongo said the government should make plans to relocate them as soon as possible.

Shishiveni called out the Namibia Exile Kids Association (Neka) for not fighting for them and merely being “a tool for the government”.

“Ever since we came here, Neka has not done anything. They are eating with the government and giving away our posts.

Neka was established in 2012 to promote the well-being and image of Namibians born or raised in exile during the liberation struggle, and to preserve the historical and cultural heritage of the Namibian liberation struggle through networking, information sharing, cooperation and lobbying.

Last year, Neka launched its strategic plan for 2022 to 2024, with one of its goals being the attainment of “affiliation membership” to Swapo.

Neka also wants to facilitate opportunities for scholarships and develop a capacity building plan, among others.

Questions were sent to Mbumba and Neka secretary general Mao Angula on Saturday but The Namibian received no response.