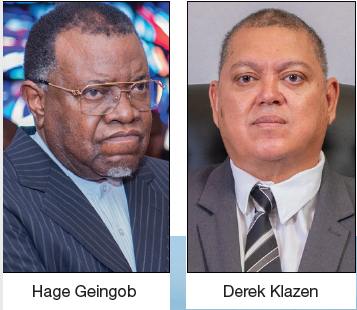 A COMPANY co-owned by Swapo is among entities lobbying the government to harvest horse mackerel in a seabed area which has been protected for the past 25 years.

The area serves as a breeding ground for fish and the development of juvenile fish stocks in the ocean.

Minister of fisheries and marine resources Derek Klazen has, since taking over the ministry, refused to relax these restrictions, despite mounting pressure and a number of meetings.

Documents seen by The Namibian show that an association representing aggrieved companies directly approached president Hage Geingob in June this year to intervene after failing to convince both the former and current fisheries ministers to allow catches in the protected area.

The matter was discussed at a Cabinet meeting chaired by the president two weeks ago.

At the heart of this dispute is a regulation introduced in 1997 by the government which restricts fishing from within 200 metres of the sea’s isobath.

An isobath is an imaginary depth line or contour under water.

The regulation in question aimed to protect the distribution of eggs and breeding ground for fish, including the money-making horse mackerel sector.

Experts believe pelagic species such as horse mackerel are found at an isobath of around 200m to 400m.

From 400m onwards deep-water species like hake and monk are found.

Politically connected companies are now pressuring the government to remove this restriction – allegedly to save jobs in the sector.

The Namibian has established that one of the companies pushing for the removal of the fishing restrictions is Gendev Fishing, a company with ties to Swapo and the vice president.

Gendev general manager Peter Strydom did this week not respond to questions sent to him on the company’s support of fishing in a special zone.

Another company that is pushing for the lifting of the restriction is Seaflower Pelagic Processing (SPP), which has now been renamed Princess Brand Processing (PBP) owned by businessman Adriaan Louw.

SPP is linked to the Fishrot scandal and was once in a joint venture with the national fishing company Fishcor.

That partnership failed after the government pulled out of Louw’s joint venture, described by the High Court as “parasitic”.

Louw declined to comment on the latest bid to fish in a restricted area.

“I am waiting for a reply from the Cabinet,” he said yesterday.

Klazen has in the past not buckled to industry pressure to catch fish in restricted zones.

Klazen is, however, said to be under pressure from Gendev and Princess to remove the restrictions.

He has now allegedly succumbed to the pressure and is planning to send two vessels into the area on an experimental basis.

The ministry allegedly also plans to use vessels belonging to the companies, since ministry vessels are not seaworthy.

Klazen yesterday said: “It is not true that the Ministry of Fisheries and Marine Resources will send two vessels to sample fish within the 200m isobath area.

“What is true, however, is that the ministry has besieged the Cabinet with a submission to alert it and seek its concurrence for the ministry to effect temporary reprieve by lifting trawling restrictions within the 200m isobath.

“The reasons . . . are to investigate claims by the wet-landed horse mackerel subsector that the entire horse mackerel biomass shifts into the 200m isobath area during winter conditions and reverses during summer seasons, and further that their fishing landings would improve exponentially if they were to be allowed to fish within the isobath . . .”

Klazen said there is no law prohibiting trawling within the 200m isobath at the moment.

However, the ministry has over the years introduced various resource management control measures for the preservation of healthy fisheries, he said.

“The trawling restrictions were necessary for the curtailing of excessive by-catches of pilchards during indiscriminate trawling and for the preservation of juvenile fish species.

“As such . . . it is imperative for the ministry to be in possession of the latest data to justify keeping the ban in place or to look at new conditions under which the ban can be lifted either permanently or provisionally.

“That, in essence, is why the ministry has made a submission to the Cabinet. As soon as the Cabinet pronounces itself on the matter, the industry will be duly informed,” the minister said.

Operators and scientists who spoke to The Namibian, say the affected companies are choosing profits over the preservation of the country’s marine resources.

“They want to go into forbidden waters so they can fill their vessels fast enough,” a fisheries ministry official says.

A fisheries scientist says the capture of fish in the restricted area could lead to species like horse mackerel going extinct.

The Wet-Landed Horse Mackerel Association is lobbying the government to remove the restrictions.

Its chairperson, Jason Angala, wrote a letter to the secretary to the Cabinet, George Simataa, on 8 September, asking the government to ignore its rules.

“[I] respectfully request for the urgent intervention by Cabinet to support our line ministry and supporting ministries to allow the few wet vessels to operate in exclusive zones at areas known where shoals of horse mackerel are present with immediate effect,” he wrote.

The association provided an explanation why Gendev and Louw’s Princess are on the ropes.

Angala claimed the government does not support the horse mackerel sector.

“There has been no constructive response from the minister of fisheries since the meeting of 29 August until 7 September,” he said.

The 200m isobath restriction zone, according to Angala, is currently not a gazetted law.

“The decision to introduce a restriction at the 200-metre depth level was done arbitrarily and was not based on any scientific research or recommendation to protect our marine resources, but rather to protect the purse seine industry from interference in the 1990s and early 2000s,” said Angala.

A purse seine is a large net used to surround a shoal of pelagic fish.

“The proposed relaxation is minimal or no risk with regards to conservation of the resource,” Angala said, despite concerns that the horse mackerel stock has become smaller over the years because of overfishing.

He said the main fish conservation tool should be the total allowable catch (TAC) system.

The 2022 TAC is 330 000 tonnes, of which the majority is caught by freezer trawlers and is exported without being processed on land.

“We received no handicap as is the case in the other fisheries across the globe in support of wet and all the benefits it brings to a national economy,” said Angala.

He said the sector employs 1 270 people, with the potential of 810 additional jobs if the restriction is removed.

This translated to 350 jobs should Gendev receive an increase in quota, and 450 if Princess is to open its horse mackerel cannery that was built in 2020.

“Both factories have basically been idle since May 2022, with overheads of salaries and wages without any income,” he said.

“The association advised minister Klazen that the payment of salaries and retention of jobs would only be possible if wet vessels can commence fishing in the exclusive zone by latest 1 September 2022,” he said.

* This article was produced by The Namibian’s investigative unit. Send us news tips from your secure email to [email protected]