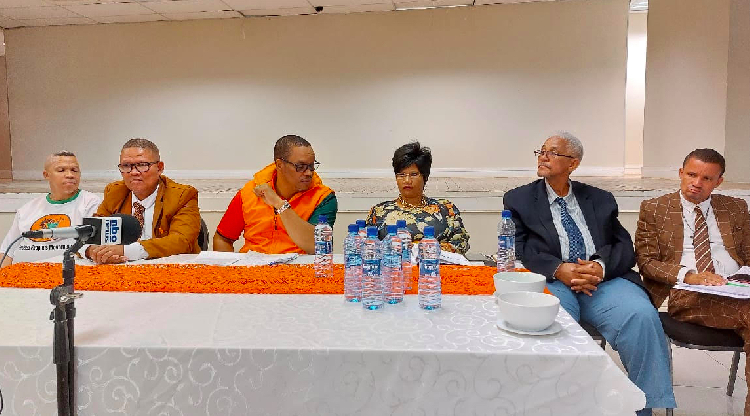 The allegations arose when LPM regional councillors delayed the regional council’s ordinary meeting on Friday by two hours to attend an LPM press conference at Keetmanshoop.

Swapo’s Oranjemund constituency councillor, Lazarus Nangolo, says it is unacceptable for regional councillors to abandon meetings aimed at discussing the developmental agenda of the community to attend to party affairs.

“Party issues are not bread-and-butter issues of the community that we are supposed to deal with here. These are people who come for the meeting and receive S&Ts for that purpose, but are going off to attend to their party issues,” he says.

On the agenda for discussion were the authorisation of the budget for the 2022/23 financial year, resolutions on the application for land at the Neckartal Dam for agricultural use in the name of the //Kharas Regional Council, and responding to the objection of allocating virgin land to Omega farming and the LL agricultural project.

Other items to be discussed were motions brought by members to dissociate from the Association of Regional Councils, and the authorisation of councillors’ official travels.

This causes council meetings to be delayed as the ministers first meet with Swapo councillors before meeting with the full council.

Beukes says LPM councillors are fighting to resolve the bread-and-butter issues of the community daily, and have struggled for months with Swapo councillors to form a management committee of the regional council as the Swapo councillors have abstained from these elections.

“The Swapo councillors must not be childish. We went to the Association of Regional Councils’ meeting at Outapi, addressed by the prime minister.

“She first met with her Swapo councillors only, and the opposition was waiting. When the ministers come to regions, the same happens.

“We, the opposition party councillors, are always sidelined when it comes to administrative issues of councils,” Beukes says.

Even though councillors are elected from political parties when serving on regional or local authority structures, the expectation is that they serve all residents within that region and town equally, she says.

“We did not boycott the meeting. We arrived about an hour and a half later,” Witbooi says.

Chief regional officer Bennie Diergaardt, the organiser of the council meetings, says notices of meetings are issued 72 hours in advance.

“This meeting was meant to start at 09h00, but we started at 11h00, based on the request, and the councillors attended to all the matters on the agenda,” he says.

Over 5 000 construction workers jobless during Covid