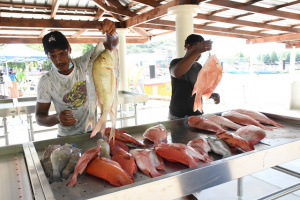 (Seychelles News Agency) – Monitoring and compliance remain significant challenges in implementing the Mahe Plateau Trap and Line Fishery Co-management Plan that came into force on October 1, 2022, to improve the sustainability of the fish stocks.

Many members of the implementation committee of the plan made this observation during their interventions at the committee’s 17th meeting on Thursday.

This ranged from complaints about low-level of monitoring at entry points where fishermen land their fish compared to higher levels at the market, and monitoring officers being denied access to the Eden Marina to carry out their duties.

The assistant manager of the license and permit section at the Seychelles Fishing Authority (SFA), Karyss Auguste, outlined in her intervention that during the month of October only eight patrols were carried out at landing sights, whereas 28 were carried out at the marketplace.

Patrols were also carried out along the coast, at fish outlets, processing plants, hotels, and takeaways. To date, only two infringements have been recorded – one at a landing sight and another at the market.

The chairperson of the committee, Roy Clarisse, shared with the press that “the committee sees that the authority is not doing enough monitoring when it comes to the plan. In some areas, people are reporting undersized fish being sold but the authority either doesn’t have the information or are not reacting fast enough.”

He further outlined that the plan is the responsibility of everyone and not just that of the authority.

“This is why we are voicing out that the association and members of the public must all play our role to ensure that the plan works, ensuring that we are able to protect these species and ensure their sustainability,” said Clarisse.

It was the reduction in catch rates and other evidence of overfishing that prompted the introduction of measures outlined in the Mahe Plateau Trap and Line Fishery Co-management Plan. Such efforts include a size limit for the emperor red snapper and green jobfish, two of the most commercially important species.

Speaking to the press, a member of the Roche Caiman Fishermen Association, Terence Labrosse, said that the implementation of the plan is important for the future.

“All countries have their set of laws that come out to protect the environment and fish, and this is something good. It will be good for fishermen to attend meetings in districts so that they are in the know, as this is a serious matter,” he said.

Pioneers of Seychelles culture awarded at opening of Creole Festival