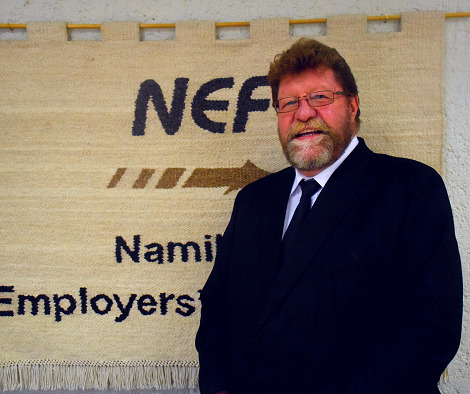 THE late secretary general of the Namibian Employers' Federation (NEF), Daan Strauss, never sought to disadvantage employees to the benefit of employers, says acting executive director of labour, industrial relations and employment creation Otniel Podewiltz.Strauss, who first joined the federation in 2020 at the height of the Covid-19 pandemic died on Tuesday after a long illness.Podewiltz describes Strauss as a valuable colleague who was thoughtful with his contributions in the labour sector.“Although representing the interests of employers and defending the positions of his constituents at all times, Strauss was always generous and thoughtful in his contributions, and never displayed an attitude and deliberate intention of merely disadvantaging the other parties, i.e employees,” he says.Podewiltz says Strauss added significant value to the entire labour fraternity and attracted the attention of labour minister Utoni Nujoma. This, he says, resulted in Strauss' appointment as a member of the labour advisory council in March 2020 and chairperson for the informal economy committee in August last year. He served in both positions until his death.The informal economy committee is a technical committee of the Labour Advisory Council which was set up to prepare recommendations on how formalisation of the informal economy should take place in light of the International Labour Organisation's recommendation 204. “He was instrumental in the formulation of the road map for the committee and the hosting of the stakeholder consultative workshop,” Podewiltz says.He says despite his health deteriorating, Strauss demonstrated commitment to his responsibilities.At NEF, Strauss' main role was to network and benchmark best labour practices and represent Namibia at government and international forums. His task was to serve and represent NEF members in ways that are not detrimental to the employee, and to represent employers at Namibian tripartite forums. According to his widow, Annemarie, Strauss was diagnosed with cancer in November 2021 and suffered total organ failure. She says despite his work ethic, Strauss was a wonderful father and husband. He enjoyed dog shows and ballroom dancing.“He was our champion. He was a magnificent human being, and we are going to miss him dearly,” she says. Strauss leaves behind his wife, three children and one grandchild. One of his three children, DJ Strauss, is Namibia's national indoor hockey captain and goalkeeper.