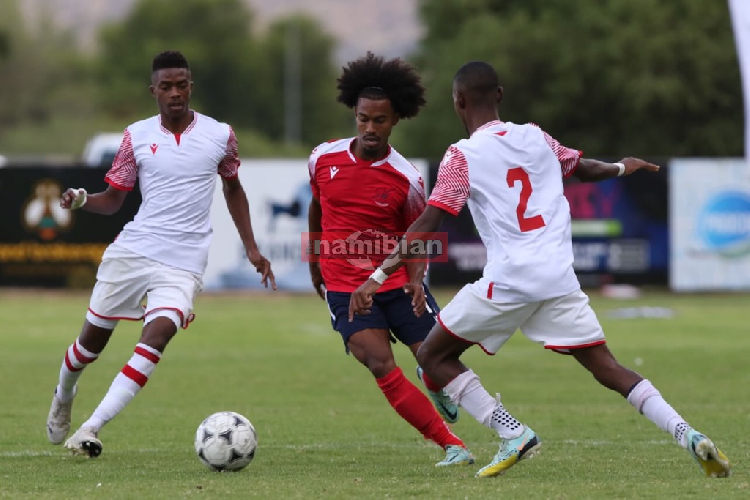 DOMESTIC football finally returned to Namibia on Sunday when African Stars kicked off the new Debmarine Namibia Premiership with a 1-0 victory against Unam.

Playing in a festive atmosphere in front of about 3 000 fans at the Hage Geingob National Rugby Stadium, Unam were rather unfortunate to concede a penalty with seven minutes to go for a handball by Ferdinand Amutenya that looked doubtful at best.

Stars’ striker Koko Katjimune stepped up and calmly sent Unam’s keeper Owen Gariseb the wrong way to seal their victory and give them a winning start to their campaign.

Stars, however, had several other opportunities, as did Unam, with both sides providing a fast flowing spectacle which had the fans cheering for more.

Unam started stronger, with their young national players John Routh and captain Tuli Nashixwa in the thick of things. Routh provided the spark for their attacks, while Nashixwa marshalled their defence well and sent a screaming freekick skimming over the bar early on.

Paulus Amutenya also came close, shooting a cutback by Vijihimisa Siririka just over the bar, but Stars weathered the early storm and with their evergreen captain Ronald Ketjijere and Hiha Katjivena shining in midfield, they started creating some chances of their own.

Their national defender Charles Hambira shot into the side-netting after a counterattack led by Koko Katjimune, while a cracking long range shot by Ketjijere cannoned off the left hand upright.

Katoorua Mbuende also headed narrowly over from an Awilo Stephanus freekick, but just before halftime a powerful header by Nashixwa skimmed the crossbar.

Stars started to dominate possession in the second half, winning several corners, while Stephanus caught the eye with some fine passes.

A Mbuende deflection from a corner went wide of the goals, while Hambira headed against the crossbar from another corner.

Katjimune also had a chance, breaking free into the box, but sending his shot straight to Gariseb.

Unam’s luck, however, finally ran out when defender Ferdinand Amutenya was adjudged to have handled the ball with seven minutes to go and Katjimune stepped up to put the spot kick into the right hand corner and seal a valuable victory.

Stars’ coach Mervin Mbakera said they had succeeded in their mission.

“After a long layoff we only got most of our players about four weeks ago, so we still need some time to get the necessary cohesion, but the objective was to get the three points, which we did, so now we just have to go and fine-tune our preparations moving forward,” he said.

“Congratulations to the boys, as well as to Unam, I think both sides displayed good football and to show the nation that we really needed football to come back,” he added.

Mbakera said he backed the referee’s decision to award the penalty.

“I think the match officials assessed the game, they will always have a better view, so for me the referee gave the penalty, and we’ll take it. I actually thought we should have got another penalty before that, and besides that we missed two clear chances, so I think we deserved the win,” he said.

Despite the defeat, Unam coach Ronnie Kanalelo said he was encouraged by their performance.

“There’s a lot we can work on during training, to coordinate our attacks better, but it’s just experience that is lacking at the moment. I always talk about making the players better and when you do that they’ll have a good chance to get somewhere and for us that’s the ultimate target – to improve the players. They brought the talent to the table, so it’s up to us, the coaches to take them a step further,” he said.

Regarding the penalty he said he didn’t have a clear view.

“I just saw my player going for a tackle and then the next moment it was a penalty for a handball, so I’ll have to see the footage and judge from there, but there were also other incidents where the referee should have been stronger in his decision making,” he said.