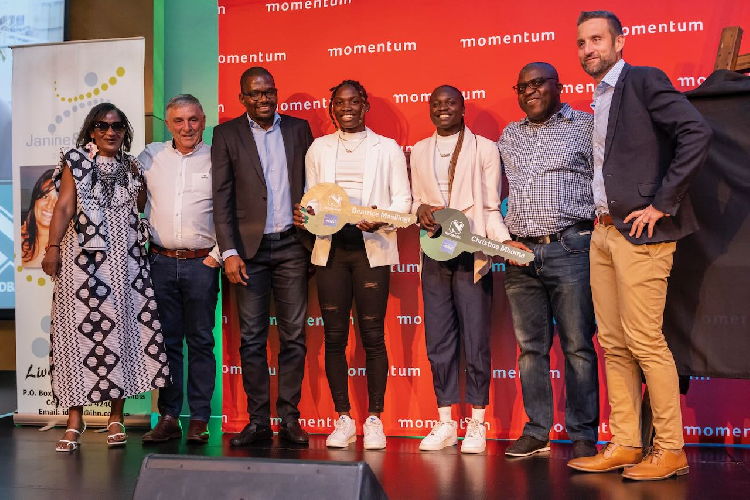 CHRISTINE Mboma and Beatrice Masilingi are close to being homeowners, with the construction of their houses at an advanced stage.

The integral part of the housing project has been completed, with the grand handover ceremony to be held at the champion sprinters’ houses at Rundu next year, the benefactors said.

The athletics stars received symbolic keys to their houses from MTC and Nedbank on Thursday, as the companies reaffirmed their commitment to building the houses in reward of their sporting excellence.

This was done during the Davin Sports Trust Wine Pairing Auction event at the Windhoek Country Club and Resort recently.

The housing project was initiated in 2020 by Nedbank Namibia, when representatives from the bank attended a dinner hosted by the Janine and Suzelle Davin Sport Trust, which is a Namibian charity organisation that aims to nurture and develop young sport stars.

At the 2020 event, athletics coach Henk Botha was awarded a platform to speak on his athletics developmental programme.

He introduced Masilingi as one of the athletes he was training, and in his address provided a brief overview of Masilingi’s background, requesting contributions to aid her in her cause of achieving sporting excellence.

Nedbank Namibia said this is where they pledged to construct a house for Masilingi, which was influenced by the fact that she and her grandmother had been staying in an informal settlement at Rundu.

Following their outstanding achievements on the track that year, MTC came on board to collaborate with Nedbank Namibia in the construction of Masilingi’s house and added Mboma to the beneficiary list.

Speaking at the handover ceremony, Nedbank’s Namibia chief financial officer JG van Graan applauded the trust for their contributions to the Namibian sport fraternity, and for assisting in making sure Masilingi realises the dream of building a house for her grandmother.

“The Davin Sport Trust is about hope, inspiration, and changing people’s livelihoods, and Beatrice and Christine are prime examples of exactly that,” said Van Graan.

Two years ago, before they became household names in Namibia and on the international front, Beatrice shared her dream of providing a proper house for her grandmother, and now two years later, we are proud of officially handing over the key to her house, not only to Beatrice, but to Christine as well,” Van Graan said.

“Beatrice and Christine, you’ve provided hope and inspiration to the entire Namibian nation. Continue doing what you do, but most importantly, the help and support you’ve received today, and will still receive, pay it forward to your families, to your communities, and more importantly, to the generations to come,” Van Graan concluded.

Geingob back after whirlwind trips to Angola, UK and US

No holding back Olomide’s fans