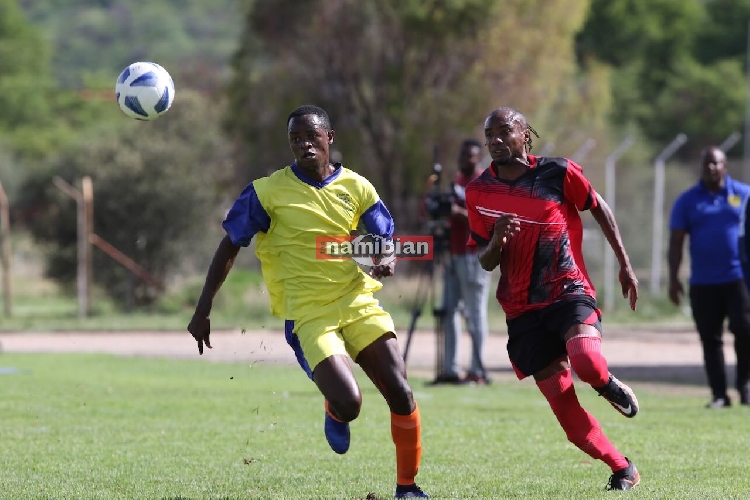 AFRICAN Stars opened up a seven-point lead at the top of the log after picking up maximum points on the road in the Debmarine Namibia Premiership over the weekend.

On Saturday they beat second-placed Life Fighters 3-1 at a jam-packed Mokuti Stadium at Otjiwarongo, and followed that up with a hard-fought 1-0 victory against Julinho Sporting at Rundu on Sunday, to move well clear of the chasing pack.

Against Fighters, Stars took a rather fortunate lead midway through the first half through midfielder Willy Stephanus, whose free-kick was spilt by Fighters’ keeper, rolling into an empty net.

Ten minutes later it was 2-0 as Manaze Salazar tapped in a cross from the wing, but Fighters opened their account shortly before halftime when pressure in Stars’ box led to an own goal by one of their defenders.

The teams weighed up evenly after the break, but Stars’ young midfielder, Chulu Kamatuka sealed their win with a great long-range strike that hit the roof of the net.

On Sunday, Stars found the going tougher against Julinho but Stephanus managed to break the deadlock with about 15 minutes to go, as Stars gained another valuable win on the road.

Those victories now put them on 25 points from nine matches – seven points ahead of Fighters and Blue Waters.

Fighters managed to regroup after their defeat to Stars to send Young Brazilians packing with a 6-1 victory at Otjiwarongo on Sunday.

The sides weighed up evenly in the first half before Fighters’ striker Eliakim Jackson broke the deadlock with a goal midway through the first half.

Fighters, however, picked up the tempo after a stern half time team talk by coach Agnus Elemu to score five more goals in the second half, while Brazilians scored a late consolation goal.

Fighters’ other goals came via Erwin Tjiuija, Lazarus Naruseb, If Musinga, Shafishuna Ngula and a second goal by Jackson.

That win saw Fighters moving up to 18 points in second position, where they were joined by Blue Waters, who picked up four points at the Jan Wilkens Stadium in Walvis Bay.

On Saturday they drew 1-1 against Orlando Pirates 1-0, with Steven Damaseb scoring their goal, while they beat Tigers 2-1 on Sunday through goals by Junior Petrus and Philip Kavari.

Okahandja United went fourth on the log on 16 points after a 2-0 win against Citizens at the Nau Aib Stadium on Sunday. They also have a match in hand on the leaders after their match against Civics on Saturday was abandoned due to a rain storm at the start of the second half, with the teams tied at 1-1 at that stage.

Mighty Gunners had a good weekend, picking up four points on the road to move up to fifth place on 15 points.

On Saturday they beat Citizens 1-0 at the Nau-Aib Stadium, while they managed to hold Civics to a 1-1 draw at the Khomasdal Stadium on Sunday.

Civics took the lead through a first half penalty by Quinton Khuruseb, but Gunners finished strongly and finally equalised through Moses Jindji with five minutes to go.

It was a good weekend for Young African who picked up maximum points at their Legare Stadium in Gobabis, after beating Unam 1-0 on Saturday and Tura Magic 2-1 on Sunday.

In other results, Eleven Arrows and Tigers drew 0-0 on Saturday, while Pirates beat Arrows 2-0 on Sunday; and Black Africa collected two draws against Tura Magic (2-2) and Unam (0-0).

BA seemed to be cruising to victory against Tura Magic when they led 2-0 after goals by Lleyton Goliath and Derl Goagoseb, but Tura came back strongly with goals by Nehemia Ndengu and Nicodemus Haikali to grab a share of the spoils.