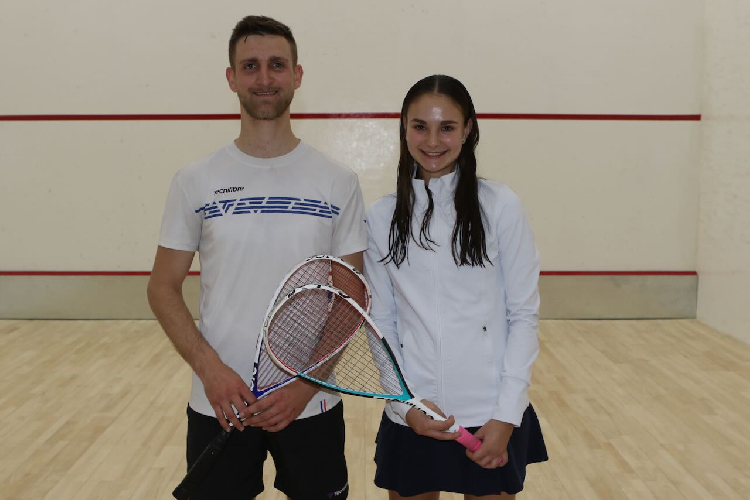 DEWALD van Niekerk and Dene van Zyl of South Africa were crowned the BDO Namibian Open Squash champions on Saturday after a great weekend of squash.

Van Niekerk, who had just come off winning the South African national title in Cape Town the previous week, entertained a packed crowd at the Wanderers court with an awesome array of shots, to which Brits had no answer.

He raced into a 5-0 lead before Brits managed to open his account, and then won an incredible 86-shot rally that lasted more than two minutes to go 7-2 ahead.

Brits managed to win two more points, but Van Niekerk, displaying some great retrieving all over the court, went on to take the first set 11-4.

It was more of the same in the second set with Van Niekerk going 4-0 ahead, before Brits won his first point with a drop shot.

Van Niekerk, however, was more consistent and superbly fit as he chased down most of Brits’ shots to take the set 11-4.

Van Niekerk said it was a great match.

“The match was awesome, its always nice playing JP, he’s one of my South African Country Districts team mates and a very close friend, so it just made it all the more special playing him in the final,” he said.

Van Niekerk said he was very happy with his form.

“I’m very happy to have won the SA Nationals, it’s one of the best titles you can win, and to win the Namibian Open as well is awesome, especially with the people and the sponsors who made this possible, so I’m very happy with my game and I just want to pick it up from here.”

In the women’s final, the young Van Zyl continued her impressive run of late to win her first Namibian Open title.

Van Zyl, who is still only 15 years old, recently won the South African u16 and u17 titles and against Chimfwembe dominated from the start as she wrapped up the match in just over 16 minutes.

Chimfwembe had no answer to Van Zyl’s powerful shots, especially her backhand, while she also displayed remarkable agility to run down most of Chimfwembe’s drop shots.

Van Zyl comfortably won the first set 11-2, and although Chimfwembe made a bit of a comeback in the second, it didn’t last long, before Van Zyl closed out the match by winning the next two sets 11-6, 11-4.

Despite the one-sided scoreline, Van Zyl said it was a very challenging match.

“Sharon is a very good player so it was quite challenging and very competitive – we were tired but we persevered and it was a lot of fun.

I’m so happy about winning this title, I didn’t think I’d win it so I’m very content,” she said.