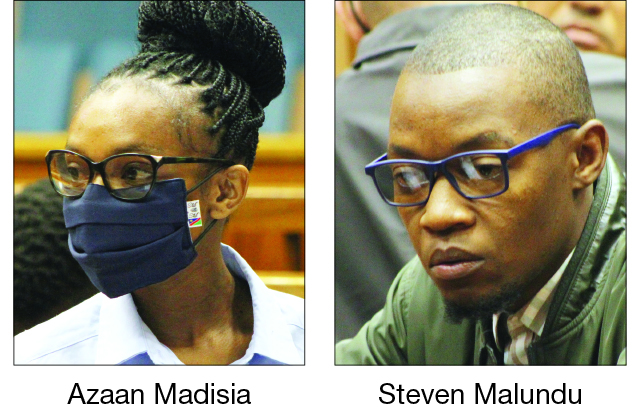 THE two siblings accused of murdering Walvis Bay resident Shanon Wasserfall two years ago will both deny guilt on all of the charges they are facing in the Windhoek High Court.

This is stated in pretrial documents that the defence lawyers representing Azaan Madisia and her brother Steven Malundu have filed at the High Court.

Madisia (30) and Malundu (24) will plead not guilty on all the charges they are to be prosecuted on, will not be making admissions on the charges, and will disclose the basis of their defence to the charges during their trial, it is stated in the documents.

It is also specifically stated that they are denying they killed Wasserfall and transported her body to the place where it was buried at Walvis Bay.

Madisia and Malundu are due to go on trial before judge Christie Liebenberg on 6 February 2023, the two siblings were informed when they made their latest court appearance before Liebenberg yesterday.

The state is alleging that Madisia and Malundu murdered Wasserfall (21) at Walvis Bay on 10 April 2020 and also robbed her by taking a cellphone, watch, pair of shoes, jacket and scarf from her.

After the killing, which is alleged to have taken place at Madisia’s flat at Kuisebmond, Madisia and Malundu used a car to transport Wasserfall’s body to an area near Walvis Bay’s Dunes Mall shopping centre, where they buried the body in a shallow grave, the state is alleging in the indictment containing the charges against the siblings.

Wasserfall was reported missing a day after she had been killed.

Almost six months passed before the police discovered her remains.

The remains were found on 6 October 2020, after Madisia had allegedly sent anonymous cellphone text messages to Wasserfall’s father and police officers involved in the investigation of her disappearance, with information directing them to the place where Wasserfall’s body had been buried.

Madisia and Malundu are jointly charged with counts of murder, robbery with aggravating circumstances, and defeating or obstructing the course of justice.

Madisia alone is also charged with two counts of fraud, alternatively theft, in connection with two false insurance claims she is alleged to have lodged with an insurance company between February and April 2020 and during September to October 2020.

Madisia was arrested in October 2020. Malundu was arrested a month later. Both of them have been held in custody since their arrest.