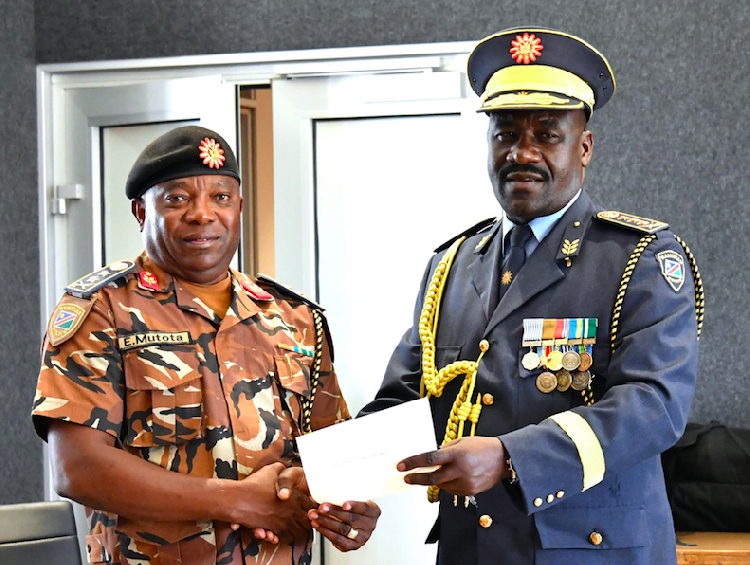 Mutota’s appointment is effective from 1 November.

Before his appointment as deputy inspector general for operations, Mutota headed the Special Field Force directorate from 2020.

He has also served as the head of the police’s intelligence department, the Special Branch.

He has served as former president Hifikepunye Pohamba’s head of security and was removed from that position after an incident that allegedly compromised the former president’s security.

Mutota has now been replaced by Willem Steenkamp.

“Go out there and make sure our borders are secured,” he told Steenkamp.

During a press briefing on Monday Shikongo said he wants to see change, and that Mutota must “do more”.

“I want you to go and change the face of the criminal situation in our republic,” Shikongo said. Mutota was born on 18 May 1967. He joined the liberation struggle in 1987 when he was 20 years old, and joined the police on 1 June 1996.

Legal affairs, which was headed by Mayumbelo, is now headed by Jamunomundu Kazekondjo, who has also been promoted from deputy commissioner to commissioner.

According to Shikongo, the reshuffling is in the best interest of the institution.

He said the promotions and new appointments are fair.

“These notions that he [the previous police chief] is endorsing Tswanas, this tribe, or his women, are obsolete,” Shikongo said.

The police chief also rejected claims that he wanted to dismiss Anne-Marie Nainda, the deputy inspector general for administration.

“The rumour that they want to get rid of major general Nainda and deport her to the ministry of gender or deport her to interpol . . . is not true,” he said. Shikongo said police management is united and will continue to be united.

“Whoever is saying there is division in the force is lying,” he said.

Five in court on obstruction of justice charges