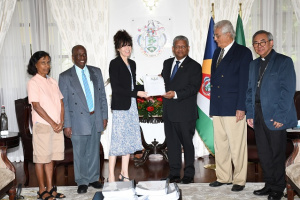 McIntyre presented an interim report to the President of Seychelles, Wavel Ramkalawan in August. (Seychelles Nation)

(Seychelles News Agency) – The mandate of Seychelles’ Truth, Reconciliation and National Unity Commission (TRNUC) has been extended to the end of December to allow it to complete its work and present a final report.

The chairperson of TRNUC, Gabrielle McIntyre, requested an extension in August when she presented an interim report to the President of Seychelles, Wavel Ramkalawan.

TRNUC was established in 2018 to work on settling past political divisions and grievances that were a result of the coup d’état in Seychelles on June 5, 1977. It had a three-year mandate which was expected to end in August 2022.

In his summing up after the vote on the TRNUC Amendment Bill 2022, Vice President Ahmed Afif answered the question whether four months will be enough for TRNUC to complete its work.

He added that no additional funding will be needed because “when their budget was approved last year, the government had already made provision that if ever  the work was not completed in August, they had a full year budget of around 16 million rupees.”

McIntyre told SNA that “this is an extremely heavy work load given that many of the cases are extremely complicated, allege numerous human rights violations, require extensive investigative efforts and more often than not involve the perusal of numerous files and documents.”

She added that “once the remaining case determinations are submitted the Volumes filed will have the status of the Final Report and pursuant to the TRNUC Act.”

McIntyre said that once the President has the final report, he has the authority to make the report public and is required to lay a copy before the National Assembly within one month of receiving it.

Meanwhile all those working with the commission have had their three-year contracts extended in order to carry out the work.

‘Everything is destroyed’: Pakistan flood survivors plead for aid