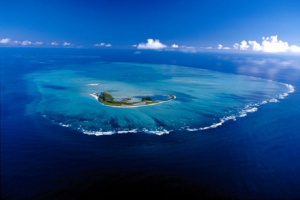 (Seychelles News Agency) – Scientists from the Islands Conservation Society (ICS) conducting systematic surveys in the Alphonse Group of outer islands in Seychelles have reported that all three islands within the St Francois Atoll; St Francois Island, One Palm Island and Bijoutier Island have increased in overall surface area.

A team has been monitoring the processes of erosion and accretion that shape islands and coastlines and highlighted these findings after collecting data for the past 13 years. A report, sent to SNA recently, revealed that St. Francois Island grew an average of 30 metres per year.

“In particular, we have observed a significant extension of the western tip of St Francois Island, known as Pointe la Courte. This area has extended in a northerly direction by an impressive 379 meters, an average of 30 metres a year,” explained conservation officer Gail Fordham.

This has brought two islands – St Francois and One Palm, very close together. “Initially it seemed as though they might merge together into one island. However, as they became nearer to each other, the channel between them deepened, presumably in response to the increased force as the water is squeezed through a narrower space during tidal cycles.”

It has also been noticed that One Palm Island is also growing, due to the accretion of sand. “As we have watched the island develop into a far more substantial area of land, we have noted signs of vegetation succession, evident through the increasing coverage of grasses on the fore-dune. This is further stabilising the island, which in turn will encourage more plants to colonise. The name of the island is no longer fitting, and the joke is often made with visitors that it should now be referred to as Twelve Palm Island,” said Fordham.

The conservation officer added that Bijoutier Island has experienced dramatic changes, although the trends are a little more complex.

“Severe erosion has been occurring on the western side, where large areas of forest have been lost to the sea. At first many thought the island was shrinking and might eventually disappear, but our data shows that sediment is building up on the eastern side where a new broad beach platform is extending and that in fact, the rate of accretion is higher than the rate of erosion – resulting in a 36 percent increase in the total land area since 2008. Outline tracks reveal how the island is moving in an easterly direction due to the concurrent processes of erosion and accretion”.

This habitat shift has had profound impacts on wildlife.

“Wedge-tailed shearwaters dig burrows and raise their young underground, and we have recorded a rapid decrease in the number breeding here. Conversely, the number of green turtles utilising the island for nesting is on the rise,” she said.

The information about coastal erosion was collected through three scientific techniques to collect different types of data; beach outline tracks, aerial photographs, and dynamic zones in reference to specific fixed points on all the islands.

Fordham explained that it is natural for islands to change over time due to shifting wind and waves patterns, that the islands move, rotate, shrink and grow, which happen on an annual basis.

“However, the effects of climate change i.e. intensified storm frequency and ocean currents, as well as rising sea levels, mean that coastal changes will be further magnified. The data we collect allows us to identify whether changes are seasonal or part of a long-term trend and this monitoring is essential for the implementation of appropriate shoreline management,” she added.

St Francois Atoll boasts one of the best wader and seabird populations in the region, and also provides an important nesting site for hawksbill and green turtles. It is a haven for fly-fishing with extensive saltwater flats and healthy fisheries, the central lagoon provides nursery habitat for juvenile sharks and rays.

On Alphonse, located 400km south-west of Mahe – the main island of the Seychelles archipelago in the western Indian Ocean, ICS collects data on numerous ecosystem indicators to monitor the health of the environment and its wildlife populations.

In addition to these long-term monitoring programmes, they are undertaking targeted research projects on various subjects like sustainability of catch-and-release recreational fisheries, spatial ecology of giant trevally, milkfish and reef manta rays and the migration patterns of seabirds and sea turtles.