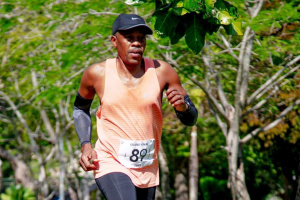 (Seychelles News Agency) – In August, Seychellois charity runner Joel Melanie completed his 2022 race calendar. At the end of the month, he ran his last run as a solo organiser and has created a new association – Runners for Charity – to continue organising more events.

Melanie, who is from Anse Royale, a southern district of the main island of Mahe, decided to start contributing towards and enriching community life by reaching out and helping others realise their dreams in 2019. He initiated a series of charity runs, which at first was a solitary exercise but as time went by and he became a household name, Melanie’s runs attracted fellow runners who participated alongside him to raise funds for different charitable causes.

“When I finished my 2021 running project, I decided that this year, I would dedicate the races to helping others realise their dream and motivate them to do so. I started with a run for Ms Sally from Machabee who needed a prosthetic arm. I chose her cause because despite what happened to her, Ms Sally retained her joie de vivre and determination to make positive contribution towards society. That was a big success,” he said.

His second race, which was in April this year, was aimed at motivating the youth to realise their full potential and at the same time realise the wish of the residents of his Anse Royale district of having a memorial of the late long jump athlete and Indian Ocean Games gold medal winner Danny Beauchamps.

“Initially, I wanted to have a bust of Danny made and placed in the Beach Park to motivate the youths to go for gold in their endeavors. However, when I linked up with the Athletics Federation, they felt it was more appropriate to have a long jump pitch in the park to encourage youths to take up that particular discipline. We have inaugurated the pitch, but we still want to put a statue of Danny Beauchamps jumping there as well,” Melanie explained.

A race in honour of his mother and her literacy achievements

Joel continued to focus more on awareness creation in his next race.

“Initially I was a bit reluctant to do that one as it was to put up a bust of my mother Mrs Melanie, as a recognition of her contribution towards the literacy programme. Way back in the second republic, the government had embarked on an ambitious programme to have 100% literacy among the population and my mother who was illiterate at the time was among the first to get on board. Over time she became an example. She wrote poems and was proof that age is no barrier and not a limit to learning.

“Despite my reluctance, I realised the importance of her contribution and as an inspiration, so last Sunday I ran to honour my mum, but more to bring home the idiom that it is never too late to learn!”

Melanie said that this last race was doubly special for him as it was the first time that his son Ed ran alongside him and that he even challenged him to a race.

He explained that the newly formed association is already preparing its first race for Christmas time.
“We want to raise funds to buy and share things to the needy during the festive season so as to share the spirit of Christmas,” he said.

Looking back on his three years of going it solo, Melanie said that his greatest satisfaction comes from the fact that he sees a new wave of people coming forward to reach out to charity activities to help the less fortunate or those afflicted.

“I feel that in a little way, I have also contributed to the rekindling of our people reaching out to one another and lending a helping hand. Recently the charity activities such as by the football and basketball federation, the music show to raise funds for singer Sheila Paul has really warmed my heart and I like to think, I have had a small influence in bringing this about,” he said..