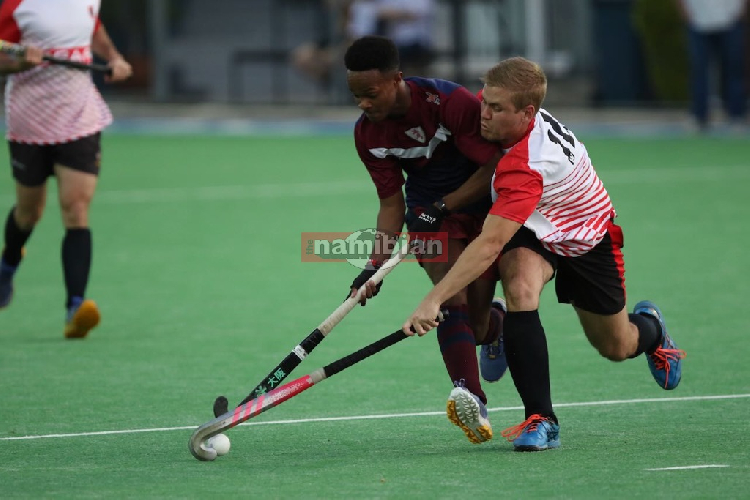 SAINTS and Windhoek Old Boys both recorded convincing wins in the Bank Windhoek Outdoor Hockey Men’s Premier League on Friday to open up a sizeable gap over the rest of the field.

Defending champions Saints recorded their third successive victory with a 4-0 win against DTS to go to the top of the log on nine points, while Old Boys are only one point behind, after collecting a bonus point in their 5-3 win against Wanderers.

Saints received stiff resistance from DTS but gradually wore them down.

Owen Hatton opened their account with a short corner goal in the first quarter, while Chase Landry made it 2-0 early in the second quarter with a cracking shot from the edge of the box.

Another Hatton short corner goal put Saints 3-0 ahead by the end of the third quarter, while DTS keeper DJ Strauss also pulled off a point blank save to deny Anton Myburgh.

DTS seldom had chances, but Lev Whittaker came close in the final quarter, with his shot well saved by Richter van Rooyen, before Hatton completed his hat-trick from another short corner to give Saints a comprehensive 4-0 win.

Wanderers took the lead against the run of play through a counter-attacking goal by Tiaan Grobler after four minutes, but Old Boys soon took control of the match.

They drew level from a short corner goal by captain Ernest Jacobs and then took the lead a minute later when Siabonga Martins finished off a quick counter-attack.

Old Boys kept on attacking but Wanderers’ defence stood firm till the third quarter when Old Boys striker Dylan Finch scored from an acute angle to put Old Boys 3-1 up.

Brandon Lassen pulled a goal back for Wanderers to narrow the deficit to 3-2, but another short corner goal by Jacobs put Old Boys 4-2 ahead in the closing stages.

Wanderers once again fought back, with Tiaan Grobler scoring a field goal, but Old Boys had the final say when Finch scored his second from a counter-attack to give them a 5-3 victory.

Saints and Old Boys are now well ahead on the log, on 9 and 8 points respectively, while School of Excellence trail in third place on 3 points.

Summit on women and agriculture