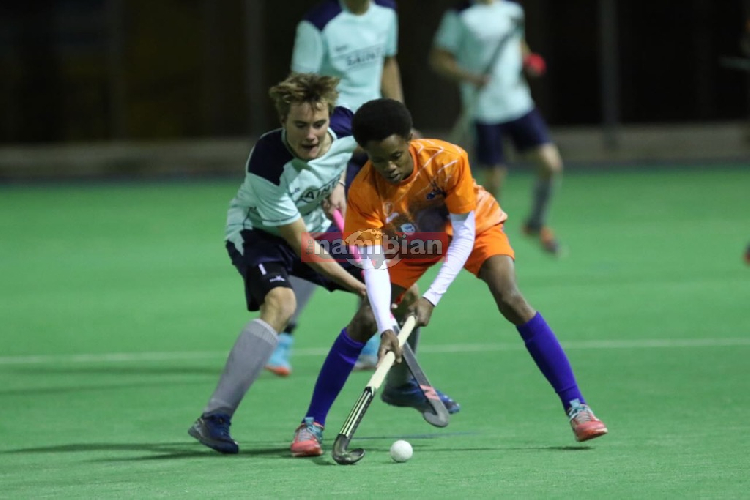 SAINTS closed in on the Bank Windhoek Outdoor Hockey Men’s Premier League title after a comfortable 4-1 victory against School of Excellence at the WHS field on Monday.

It was their sixth consecutive victory this season and although second-placed Windhoek Old Boys still have a mathematical chance of catching them, it’s highly unlikely.

On Monday, they initially received strong opposition from School of Excellence, but they gradually asserted their dominance.

School of Excellence took the lead when Isascar Tjikuniva scored after a rebound from a short corner, but Christiaan du Raan soon equalised for Saints when he stabbed home a rebound from an Owen Hatton cross.

Saints took the lead early in the second quarter when Du Raan’s shot was saved, but Aiden Landry was on hand to put the rebound into the net, while another Landry field goal just before half time put them 3-1 ahead at the break.

Saints had several more chances in the second half, but School of Excellence’s keeper Robin Kambinda pulled off some fine saves, before Hatton sealed Saints’ victory with a goal from a short corner in the final quarter.

The victory extended Saints’ lead at the top of the log to 20 points from six matches, while Old Boys are way behind on eight points, although they have two matches in hand.

Wanderers, meanwhile, recorded their first win of the season when they beat DTS 3-1 at the WAP field.

Kobus de Sousa put Wanderers ahead after a quick counter-attack at the end of the first quarter, while he added a second from a short corner rebound to put Wanderers 2-0 ahead at half time.

DTS had their fare share of possession, but created few chances of note, and Wanderers went 3-0 ahead when Brandon Lensen scored at the start of the final quarter.

DTS finally opened their account when Jason Bolton scored from a short corner, but it was not enough as Wanderers cruised to victory.

Wanderers are now on three points, along with School of Excellence, while DTS are bottom of the log on zero points.

DTS, meanwhile, picked up their first win in the Men’s First Division when they beat Wanderers 1-0, with Lev Whittaker scoring the winner through a field goal in the final quarter.

The victory puts DTS fourth on the log on three points, but Masters still have a comfortable lead on 16 points, followed by Old Boys (9) and Saints (8).

Queen loved and loathed in death