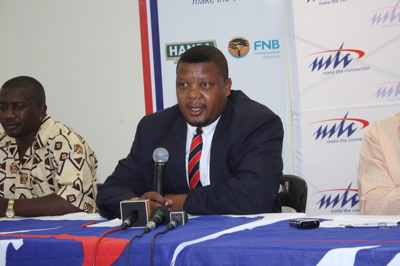 FORMER secretary general of the Namibia Football Association (NFA) Barry Rukoro has warned club owners of their unbecoming behaviour that could lead Debmarine Namibia to retract its N$13 million sponsorship of the top-flight league, which is expected to kick off this weekend.

Speaking to Desert Radio this week, Rukoro said the reported refusal by some clubs to take part in the 2022/2023 football season will be a slap in the face for Debmarine Namibia.

Over half of the 16 clubs invited to be part of the league are up in arms over the league’s organisation and have given the NFA until today to address their grievances, and at least eight of those have not begun preparing for the start of the new season altogether.

“If that happens, it will not be fair to the footballers and the country should Debmarine Namibia reconsider its decision not to sponsor football. The onus must be squarely laid on the shoulders of the clubs refusing to board the bus,” Rukoro said.

Rukoro said the Fifa Normalisation Committee (NC) for Namibia had done what it could under very trying circumstances to secure the sponsorship deal. It would be a travesty for football should the sponsor withdraw because of the never-ending squabbles.

He said the current situation may yet lead to government intervention because football administrators, especially club owners, do not see eye to eye.

Such a development will not be looked upon favourably by Fifa, which does not take kindly to third-party interference in football disputes.

“We football lovers want to ask the clubs to re-look at themselves and see how many football players are suffering as a result of their actions,” said Rukoro.

“It is to nobody’s benefit that football is not starting. I ask the clubs kindly and humbly to come to their senses.

“It has been long coming that some clubs have held football hostage. Football was supposed to have started a long time ago, but that has to date not happened.”

Furthermore, a 16-member football league is not necessary, given the small population and a scarcity of resources, Rukoro argued.

He referenced countries like Denmark and Scotland with just over five million people each having 10 clubs in their respective top-tier leagues.

“It will be best for Namibia to have a football league comprising 10 to 12 teams. By doing so the league will be competitive, stronger and able to export more players,” said Rukoro.

He nonetheless congratulated the Fifa NC for its achievement at restarting football following many years of an inactive football league.

The 2022/23 football season is scheduled to kick off with African Stars against Unam FC at the Hage Geingob Stadium on Sunday at 17h00.