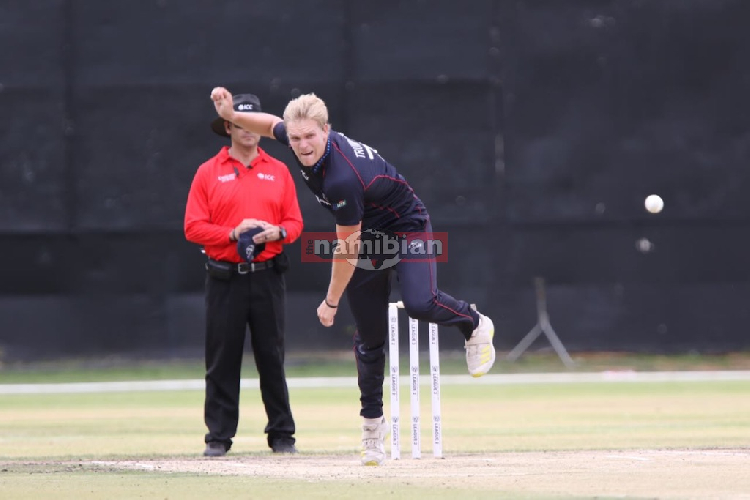 THE Namibian Eagles take on the United States in the final match of their first Trinations series tomorrow, coming off a thrilling three-wicket victory against Papua New Guinea on Wednesday.

The USA comfortably beat Namibia by 71 runs in their first clash last Sunday, but will come up against a rejuvenated Namibia who pulled off a stunning comeback victory against PNG on Wednesday.

PNG posted a competitive total of 236 all out and then seemed to be on course for victory when they restricted Namibia to 6/109 halfway through their innings.

Namibian captain Gerhard Erasmus (71) and Ruben Trumpelmann (55 not out), however, led a gritty revival with a 76-run seventh wicket partnership, and with Pikky Ya France adding 23 not out at the end they reached 241/7 with two overs to spare.

PNG’s top order clicked for the first time on their Namibian tour as all their leading batsmen got amongst the runs.

Namibia’s pacemen Tangeni Lungameni and Ruben Trumpelmann, however, cleaned up the tail, with the final five wickets falling for only 12 runs as PNG were dismissed for 236.

Lungameni had great figures of 6/42 off nine overs, while Trumpelmann took 4/53 off 9,2 overs.

In reply, Namibia’s top-order batsmen could not get going as they regularly lost wickets.

Erasmus and Zane Green, however, led a revival before Green was out for 20, while Erasmus and Trumpelmann took the total to 185 before Erasmus was dismissed for 71 off 96 balls (7×4, 2×6).

The momentum had shifted to Namibia and Trumpelmann maintained the tempo, scoring 55 not out off 60 balls (2×4, 2×6), while Ya France added 23 not out as Namibia sealed a thrilling three-wicket win.

Lungameni won the man of the match award for his figures of 6/42 which is the best yet by a Namibian player in One Day Internationals.

The win saw Namibia remaining fourth on the World Cup League 2 log and well on target to reach the final 2023 World Cup qualifier for the top four teams.

I was cheated in Swapo elections — Geingob