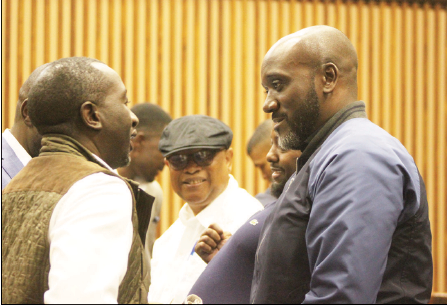 THE 10 men charged in the pending Fishrot fishing quotas fraud and corruption case will have to return to the Windhoek High Court for another pretrial hearing in October.

Acting judge Kobus Miller again postponed the case yesterday, after defence lawyer Trevor Brockerhoff, who is representing the first accused in the matter, Ricardo Gustavo, informed the court he is still waiting to hear if a petition he filed at the Supreme Court is successful.

Gustavo wants the Supreme Court to allow him to appeal against a ruling in which Miller in May refused to step down from the case that was assigned to him early this year.

To give the Supreme Court more time to make a decision on Gustavo’s petition, the case has now been postponed to 19 October, when the 10 accused should attend another pretrial hearing in the High Court.

Gustavo unsuccessfully asked Miller to recuse himself from the case because of remarks he made in a judgement in July 2020, when he dismissed an appeal by Gustavo against a magistrate’s decision to turn down his first application to be granted bail.

Gustavo has complained that Miller stated in his appeal judgement that during his bail hearing the state had made out a case against him on which he could be convicted.

In the judgement in which he turned down Gustavo’s application for his recusal, Miller noted that the remarks made in his appeal judgement were entirely based on evidence heard when Gustavo applied for bail in the Windhoek Magistrate’s Court.

He said his preliminary view of evidence could not be equated with a final finding that would follow in a trial, once evidence had been heard.

Miller concluded that Gustavo did not show he would be biased if he presided at the eventual trial.

They are due to be prosecuted on 42 criminal charges, including counts of fraud, bribery, corruption, racketeering, money laundering and tax evasion.

The state is alleging that the accused acted together to devise a scheme in which they benefited financially from arrangements to give the Icelandic-owned fishing company group, Samherji, access to Namibian fishing quotas, through Fishcor and the company Namgomar Pesca Namibia, of which Gustavo was the sole director and an employee.

According to the state’s allegations against the accused, tens of millions of Namibia dollars in quota usage fees, paid by the Samherji group of companies, were channelled to the individual accused and corporate entities and trusts represented by them, whereas the fishing quotas to which Samherji had gained access had supposedly been allocated “for governmental objectives in the public interest”.

The state has lodged an appeal against the judgement in which Gustavo was granted bail, which is scheduled to be heard in the Supreme Court on 14 November.

Narrow escape for fishermen as vessels collide in fog