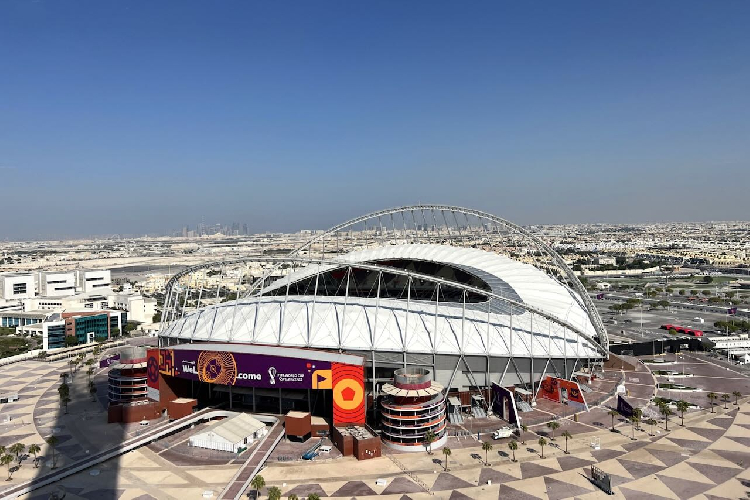 THE moment Qatar, and the world, has been waiting for is here. Fans and teams have started arriving in Qatar, as the Middle Eastern country prepares to host a fiesta to remember.

As football takes centre stage, hosts Qatar are targeting a positive start to the Fifa World Cup against Ecuador on Sunday to galvanise support and set the tone for the 29-day tournament, head coach Felix Sanchez said.

The much-anticipated global spectacle gets going amid a barrage of criticism by the West over human rights concerns in the Gulf state.

Qatar are appearing at their first World Cup and will be desperate to put on a show and be in contention to advance from Group A and drown out the negative press.

Sanchez hopes his team will prevail against Ecuador and make a strong start in the tournament.

“We waited for a long time to get to this event. Obviously, everyone is looking forward to the tournament,” Sanchez told beIN Sports.

Winners of the AFC Asian Cup in 2019, where they beat Japan in the final, Qatar also finished third in the Fifa Arab Cup in 2021.

With a squad comprising players who all play football domestically, Qatar will be hoping to show the world they’re not just there to make up the numbers.

“I hope you will enjoy the World Cup in Qatar and you will support our team. We need your support and we will try to make you feel proud of the team,” Sanchez said in a video message before team’s training session on Wednesday.

The Qataris are eager to excel against a reinvigorated Netherlands and African champions Senegal who complete Group A.

“We feel proud to be part of the event, and we will try to do our best, play at high levels, and compete with the teams we will face,” Sanchez said.

Seasoned midfielder Abdulaziz Hatem said the team is brimming with confidence before they begin their campaign at the Al Bayt Stadium in Al Khor.

“We have prepared well and our spirits are high. We are having fun. We are relishing this time as the World Cup approaches. I think everyone of us is very proud to be playing for the national team,” he said.

Qatar are weary of the threat posed by an exciting Ecuador side, which finished fourth in the South American qualification standings ahead of Colombia, Peru and Chile.

Ecuador has the youngest team to qualify from South America. With Argentine coach Gustavo Alfaro having a cohesive blend of youth and experience under his command, they will hope to reach the knockouts for the second time after 2006.

“Although we’ve talked about each of our opponents, the priority for us right now is ourselves. No matter how much we know about Qatar, Senegal and the Netherlands, if we’re not at the races in our games, that information will be of no use to anyone. If we’re to make the most of that information, we have to make sure we improve as a team,” said Alfaro, who has worked as a commentator at four Fifa World Cups.

There is plenty to be optimistic about beyond the reservations voiced since it was announced that Qatar would be hosting the 2022 Fifa World Cup, not least the pantheon of stars on show in the the global 32-team competition.

From fashion shows to concerts and theatre performances, to children’s activities and amusement parks there is an event taking place in every part of the country.

On the ground, fan parades have become a common sight along the Corniche. Men, women and children of all ages and nationalities gather in large groups to dance, cheer and sing for their favourite teams – with Brazil, Argentina, Morocco, Senegal and England the most popular so far.

One very definite element of the 2022 World Cup to look forward to will be the eight state of the art stadiums, on which Qatar has spared no expense.

Innovation and sustainability is at the heart of Qatar 2022, with cooling technology one of the tournament’s major success stories.

With more than 1,2 million fans expected in the country for the World Cup, Qatar has set up a tech hub that uses artificial intelligence to keep an eye on the spectators, predict crowd swells and even control stadium temperature.

More than 100 technicians will be working around the clock at the Aspire Command and Control Center, closely monitoring images flashing across their screens via 200 000 integrated units, from 22 000 security cameras spread across all eight World Cup stadiums.

Hundreds lined up on Wednesday for a test event at Al-Bidda Parkin Doha, which can hold approximately 40 000 fans.

The fan festival venue will act as a public viewing and gathering site where all matches will be shown live.

Excitement levels are rising, the festivities are in full swing and the teams are arriving. Opening day approaches – let the games begin.

Women take up beekeeping – The Namibian