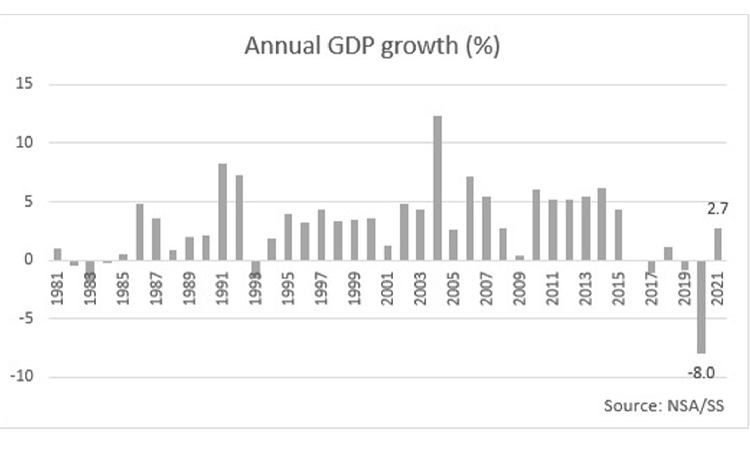 GROWTH in the primary and tertiary sectors was responsible for the country’s economy expanding by 2,7% in 2021, compared to a preliminary expansion of 2,4%.

This is according to Simonis Storm Securities’ analysis of the latest national accounts, released by the Namibia Statistics Agency (NSA) yesterday.

According to the analysis, total private consumption constituted 75,1% of GDP in 2021, making this a crucial component of economic growth in Namibia.

“Consumption spending mainly took place in the food, housing and education sectors during 2021. Given the rise in inflationary pressures experienced in 2022 for numerous reasons and tighter monetary policy (i.e. higher interest rates), we remain concerned that consumption spending will be under pressure and weigh on the economic growth outcome for 2022,” said Simonis.

The analysts said a 14,3% annual growth in gross fixed-capital formation (GFCF) was recorded in 2021, coming in higher than the 13,4% recorded in 2020. Investment activity was recorded mainly in the mining, financial services and manufacturing sectors during 2021.

“This is indicative of a recovery in demand for credit and investment activity, which we expect should be positive for 2022 as well, given that private-sector credit extension has been trending above 2021 levels year to date,” the analysts said.

The decline in spending was primarily due to decreases in current transfers to households and non-profit institutions serving households.

“Without the need for Covid-19 relief spending in 2022, we expect government expenditure to marginally rise from 2021 levels during 2022. Public wage increases would also lift total expenditure going forward,” said Simonis in its report.

Namibia has recorded a trade deficit each month, averaging N$3,4 billion per month during the first half of 2022, despite a material improvement in mining production during the same time.

“We expect Namibia’s negative trade balance (net export component) to weigh on the GDP calculation during 2022. For now, we maintain our GDP growth forecast of 2,5% for 2022,” Simonis said.