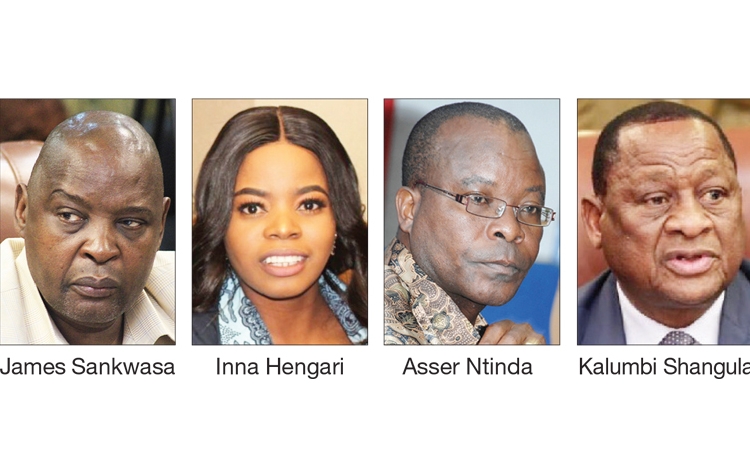 This comes after The Namibian on Friday published a report detailing how businessman Shapwa Kanyama’s company, Aminics Trading, has been awarded a N$650 million tender to supply the government with three million surgical gloves valued at N$400 million, and 108 million condoms valued at N$111 million.

He also calls for an investigation into the way the tender was awarded.

He says he asked Geingob on Friday to halt the medical supply tender awarding process.

“Stop this greed, malfeasance and corruption with tenders. You are the president of the country, stop this tender, put an investigation in and get the matrix of the investigations out, and then let’s go ahead,” he says.

Venaani says the country is supposed to have a local condom manufacturing industry.

“It is not the man who won the tender in this case, it’s those who gave him the tender. They must be answerable,” he says.

All People’s Party leader Vincent Kanyetu says the timing of the tender is wrong as the country is still coming to terms with the economic ruin caused by the Covid-19 pandemic.

“That money needs to be allocated for something that would give life to the people,” he says.

“We don’t need condoms. Why is the government trying to force people to use condoms? Diseases do not only happen through intercourse. When people are kissing, are you going to produce condoms to put on our tongues?” he asks.

Landless People’s Movement spokesperson Eneas Emvula says nothing will change until the government and Namibians take decisive action for change.

“A leftist political party remains an advocate for that change, but there will be limitations to such a change if Namibians have not reached a realisation of how much trouble the country is in,” he says.

“Condoms are imported, this we know, but should not cost the state or taxpayers this much. We can get them for a fraction of this amount from the UNFPA in Copenhagen, Denmark,” he says.

Opposition member of parliament Inna Hengari took to social media to criticise the tendering process and called for urgent intervention.

Former deputy minister of works and transport James Sankwasa describes the tender as blatant economic sabotage which has the potential to damage the reputation of the ruling party.

“Obviously the two ministers must come out publicly and share with the nation where they stand when such day-time robbery of government resources is being carried out. They have both a constitutional and moral duty to the nation and the party,” he says.

Former Swapo weekly newsletter editor Asser Ntinda has also thrown his weight behind the halting of the tender.

“Stop this tender. Use the same power you used when you cancelled that highly inflated Hosea Kutako Airport tender. Hospitals are without critical medicine. Schools are without learning materials. Condoms should be the last item on our shopping list please,” he says.

An online petition led by Namene Timoteus, which was started on Friday demands the cancellation of the tender.

By yesterday afternoon the petition had 7 202 signatures.

“It doesn’t take an expert to figure out that our public healthcare financing and procurement system is captured at the highest level. The money that is injected annually through public procurement does not reflect the conditions on the ground – where staff in hospitals work in squalid conditions, utilising whatever means in order to save lives,” part of the petition reads.

The Central Procurement Board of Namibia (CPBN)’s head of administration, Amon Ngavetene, says the tender evaluation for the medical supplies will go ahead.

“It should be noted that the notice for selection of procurement award is not a final award and may change upon the reconsideration of any issues that may be raised by bidders during the standstill period which was from 12 to 20 January,” he says.

Minister of health and social services Kalumbi Shangula has justified the procurement of millions of condoms, saying they are one of the effective methods to prevent HIV infection.

“It costs less than N$1 to prevent HIV infection and unwanted pregnancy by using a condom during sexual intercourse. It, however, costs thousands and thousands of Namibia dollars to treat AIDS . . . We subscribe to the axiom that prevention is better and cheaper than cure,” he says.

Asked whether there is a possibility for the figures to be reviewed, the minister said: “You should ask the CPBN. The ministry does not deal with tenders. The media has misled the public.”

Presidential spokesperson Alfredo Hengari was not available for comment yesterday.