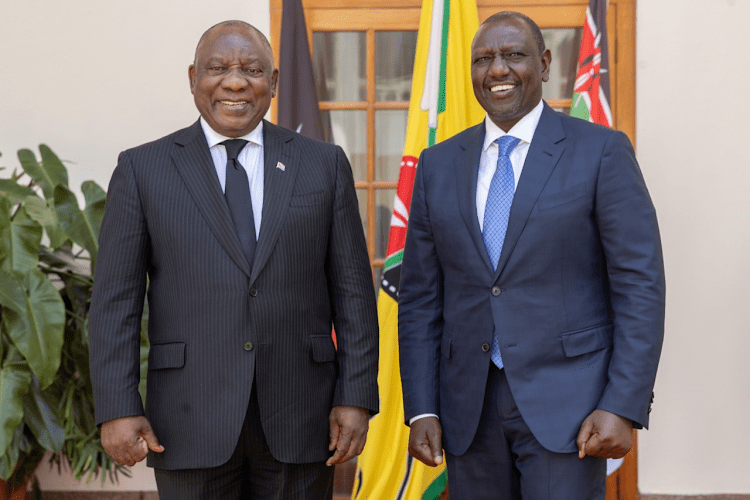 The newly elected President of Kenya, William Ruto, has taken advantage of the official state visit of South African President, Cyril Ramaphosa to convince his counterpart to lift the visa requirements for Kenyan citizens.

The news has come as a welcome development for both countries and Africans at large, who see the move as a positive step towards inter-regional integration within the African continent.

President William Ruto made the news public while addressing newsmen at the State House in Kenya on Wednesday, November 9. The President noted that the deal had been finalized and that Kenyan citizens would have visa-free access for 90 days per year.

“From January 1, 2023, we will have a different regime thanks to your personal intervention in this matter and the wealth of experience that has been brought on board by your officials.

“Kenyans holding ordinary passports will be allowed to enter South A Africa on a visa-free regime of up to 90 days per calendar year,” stated the Head of State.

Also, the President revealed that he and Ramaphosa had reached an agreement on how to deal with citizens from their respective countries who are found flaunting laws in the host nations.

“The two countries have also agreed on a return policy when immigration laws are breached to make sure that bad elements that try to infiltrate our borders are dealt with firmly and decisively,” he remarked.

In addition, he announced that a resolution had been reached to identify, monitor, and resolve non-tariff barriers that affect trade between the two countries.

On his part, Ramaphosa reiterated that South Africa was committed to maintaining strong bilateral relations with Kenya in several areas of mutual interest.

“We are committed to ensuring that the agreements signed now and in the past will be implemented fully. Kenyans and South Africans have a multiplicity of relations which will be enhanced through these agreements,” the President stated.

The South African head of state noted that he and Ruto would explore the opportunities for businesses in the respective countries.

Furthermore, the two presidents discussed issues that affect their respective regions and the continent, such as the war in the Democratic Republic of Congo (DRC) and the climate change crises.

Before the visit, there were high hopes that the presidents would use the opportunity to discuss a range of issues, including relaxing visa conditions between both countries.

“According to the World Bank, Kenya is east Africa’s largest economy and gateway to the region with a GDP that stands at over 110 billion US dollars as of 2021. Moreover, Kenya is South Africa’s largest trading partner outside of the SADC region, making South Africa the biggest seller of goods to Kenya on the continent,” he said.

Visa restrictions have remained a thorny issue for the two countries for years, including a high charge as processing fee. In addition, as part of the former laws, Kenyans applying for visas to South Africa must also provide proof of sufficient funds and return flight air tickets.

Despite all the restrictions on Kenyans in gaining visa entry into South Africa, South Africans get a Kenyan Visa for free on arrival to the country.

How Cryptocurrency Tax Works in India | The African Exponent.