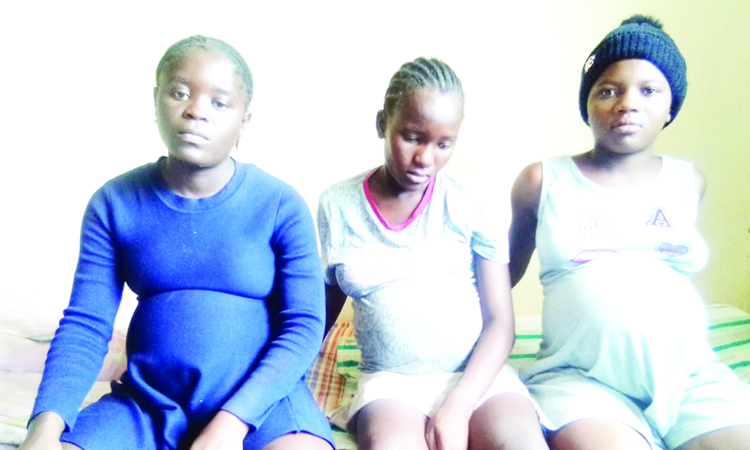 A GROUP of teens sit in the shade under the massive trees that provide some respite from the scorching heat at the Ewaranta shelter for pregnant women.

They weave baskets to pass the time, which seems to stand still.

They are all in their final trimester of pregnancy.

The shelter in the Ohangwena region provides a place of refuge for expectant women from far-off villages during the final months before delivery.

“It’s too risky for them to stay far away when they are about to deliver. Most of them are brought here by family members to be close to the Eenhana hospital’s maternity facilities,” says Ewaranta housemother Saima Imene.

“The younger girls are vulnerable, they are having babies for the first time and they are not prepared,” says Imene.

The girls are often sent to Ewaranta during their eighth or ninth month, she says.

“Here they are surrounded by other pregnant girls of their age. They spend their final days of pregnancy here together. The reality of being young and pregnant, and uncertain of their futures with babies, becomes a shared burden, and that makes it easier to cope.”

Secilia Natangwe (15) is nine months pregnant. She’s been at the shelter for a month.

The Grade 9 pupil was released from school in her sixth month of pregnancy, however, she is lucky enough to be able to write her final exams.

However, Secilia is nowhere in sight.

Hedimbi says she asked her to wait a little because she needs to lie down.

“I will wait for her, there is still enough time. She can resume with her paper when she is more comfortable,” says teacher Salmi Hedimbi.

While she waits, Hedimbi speaks of the challenges facing pregnant pupils, such as dropping out of school due to stigma and bullying by other pupils.

“We all know the region has a high rate of school dropouts for young girls due to pregnancies. These are not only girls from poor families. We have a lot of young girls who are left to live on their own while their parents are off working in other towns. This exposes them to social ills and early sexual experimentation.

“We do talk to young girls and boys at school, we have life skills as a subject, and biology, where they are taught about sexuality and contraceptives, but somehow these girls just end up pregnant,” says Hedimbi.

During our discussion, Hedimbi called away to where Secilia is resting. She returns a short while later to say the exam has been put on hold because the girl is in too much discomfort.

“She will not be writing today, it looks like she is going to the hospital for delivery. I don’t know what is going to happen regarding the examination. We will discuss it at the school.”

There’s no doubt teenage pregnancy can change the course of young girls’ lives, as they are forced to become responsible for another human being at a tender age.

Paulina Shivute (16) is shy and slow to speak. She is in her ninth month of pregnancy. The boy responsible for the baby is 18 and in Grade 9 at a different school at Ondobe.

Paulina left school when she was five months pregnant.

“I decided to leave school early on because it was becoming increasingly uncomfortable for me. The bullying, insults and dirty, funny looks from my fellow pupils became unbearable,” she says.

Paulina and the other pregnant girls all had to leave school but were given the option to continue their studies next year.

However, they are sceptical about returning to school and unsure of what life will be like once they have given birth.

Statistics from the United Nations Population Fund (UNDP) reveal that 1 260 teenagers in the region fell pregnant in 2021 alone.

Ohangwena regional director of education Isak Hamatwi has accused some parents of encouraging children to engage in sexual activities with older men for economic reasons.

“Expecting a baby at a young age is a huge responsibility, your life changes permanently and you are not ready. Most young pregnant girls become very angry at themselves, blaming themselves for being in that situation. It must be emotionally hard and this involves anxiety and questions about the future,” he says.

“From a psychological point of view this is a real crisis,” says Whittaker.