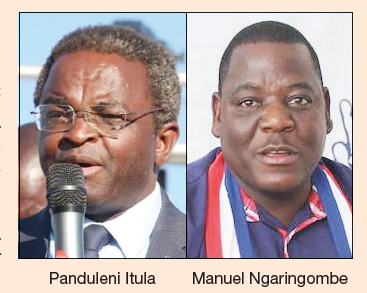 THE Popular Democratic Movement (PDM) and the Independent Patriots for Change (IPC) have taken their campaign trail to the regions as the 2024 elections draw nearer.

Bread-and-butter issues are some of the challenges the opposition parties say they have been observing around the country.

“From what we have seen thus far, the issues for the community are the bread-and-butter issues – very basic needs. They need clean water, they need roads, they need employment and schools, and they need access to healthcare services,” IPC secretary general Christine !Aochamus says.

“We find it very disappointing that we are still struggling with meeting the very basic needs of our communities – that is unacceptable.”

PDM is also on the ground with its countrywide mobilisation and recruitment drive.

He added that the biggest challenge is unemployment, especially among the youth. “There is no hope of employment and that makes them very worried. There are no opportunities to keep out-of-school youths busy. But the most important thing is that people are really struggling with basic needs,” Ngaringombe said.

Opposition parties have adopted a proactive approach, of going out to the electorate ahead of the national elections.

Normally, political parties go into hibernation soon after the elections, and re-emerge toward the next elections.

Earlier in May, PDM launched its 2024 #GiveUsAChance-WorkWithUs campaign aimed at mobilising the electorate ahead of the 2024 presidential and National Assembly elections.

The party noted that the hashtag, which has been translated into local languages, will assist PDM engage directly with the electorate to establish a symbiotic relationship built on trust and understanding of the issues the people face daily.

PDM has also taken a bold step to infiltrate the northern regions, which are the domain of the ruling party, Swapo. The party opened a regional office at Oshakati last Saturday.

“We want it to serve the north-central regions, that is Omusati, Oshana, Ohangwena and Oshikoto. The aim is to be the centre of operation, so that people can go out to constituencies and mobilise the movement. That is very important, because at least people now know where to go, if they want membership cards or have concerns and issues around their areas,” he said.

!Aochamus said the countrywide visit is part of IPC’s calendar of key events.

“The idea of going around the country is to really get to the masses, to the electorate, to get from them the challenges. If you look at areas like Ohangwena, for example, some areas have no access to clean water. If you go to Kavango, their biggest concern, also in the Zambezi region towards Impalila, you find that there are no accessible roads in those areas,” she said.

“What we are doing now is to collect those challenges from the people who are affected themselves. And with that, we are going to incorporate those into our priorities as the government-in-waiting. When we take over, we don’t want to wait until 2024 and a few months before the election.”

The next major event on the party calendar is the public introduction of party leader, Panduleni Itula as IPC presidential candidate for the 2024 elections. The event will be held at Kandjengedi at Oshakati on 26 November.

Political analyst and University of Namibia academic Rui Tyitende has welcomed the opposition’s strategy to start campaigning well in advance.

He said it is a new phenomenon that opposition parties are maintaining visibility and presence throughout the election cycle.

“The reason they are doing this now is so that come 2024, they can articulate to the nation that we have been on the ground since the beginning, here we are. Politics is all about visibility, because if you are only visible towards the end of the cycle, voters will not take you seriously. I think it is good they are doing it now. I actually like to see all political parties and formations already going on the ground and articulating a clear comprehensive development agenda, that is to sell themselves to the Namibian public. What the current government is doing is wrong. How are they going to improve on that?” Tyitende said.