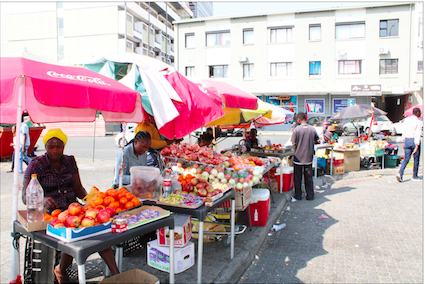 THE City of Windhoek plans to bring open markets to the city centre, as it claims the current areas where vendors are trading from are degrading the face of the central business district (CBD).

This comes after councillor Queen Kamati raised the motion during the council meeting yesterday that a lack of adequate planning has led to a few open markets and the illegal mushrooming of vendors around Windhoek.

“This illegal trading is degrading the face of the CBD,” she stressed.

Kamati said these unregulated activities contribute to the unhygienic conditions in the city, particularly in the CBD.

“The reality on the ground is that there are simply no adequate informal trading areas in Windhoek. Our people are scattered all around town, trading at areas that are not designated as trading spaces,” she said.

Kamati argued that the few informal trading areas are located away from the target market, bus terminals, taxi ranks and other economic hubs to cater for the residents economically.

The council on Wednesday supported Kamati’s motion, which will see the land to the north of Wernhil Park developed into a state-of-the-art informal market, bus terminal and taxi rank.

Kamati suggested that all shopping malls have bus terminals and taxi ranks.

“Council should consider making the development of trading markets, bus terminals and taxi ranks a requirement before approving future applications for shopping malls,” she said.

To start this project, the councillors have agreed to visit the Oshakati open market to benchmark what the city centre open market should look like.

“A benchmark visit should be undertaken to the Oshakati Town Council to view the layout and the demarcation of the Oshakati open market,” Kamati stated.

This motion was supported by councillor Joseph Uapingene, who said Namibians, under their own government, are sidelined when it comes to development and inclusivity.

“We were talking too much before independence. We are given the chance to govern our own country now, [but] we still have this mentality that the open markets should only be in Katutura [when] they can also be in town,” he stressed.

Uapingene used the Oshakati open market as an example of what the proposed trading area could look like.

“It is the face of Oshakati. Very beautiful. Why can it not be next to Wernhil Park, because we have that thinking of, no, the open market should only be in Katutura?” he questioned.

Another councillor, Ivan Skrywer, also told the meeting that during their engagements with the vendors they were told the municipality had heard their ideas, similar to Kamati’s, but they were never acted on.

“These external people will tell you ‘we have presented these ideas to the department’,” he said.

Last year, a study conducted by the United Nations Development Programme (UNDP), revealed that the informal sector in the country remains neglected in terms of facilities, capacity and recognising it as an economic development activity for any town.

Five years earlier, a similar report was released by the Ministry of Labour, Industrial Relations and Employment Creation, which stated the same challenges that the informal vendors face.

Some street vendors currently trading in the city centre feel they do not need a formal market as they will not be able to afford the rates, and their customers might not be able to easily access the market.

Vendor Lusia Upindi (61), yesterday said: “If we go there [new location] where will we get customers? There are no customers that side. Our customers are here near the shops. It makes it easy for us to get the customers that come out of the shop here.

“They are making decisions for us there in their office without even first asking us to make decisions on our own. If they want to do something, then they must ask us first to find out if we want it or not.

“That is how they built the open market at Wernhil Park that is very expensive and we cannot afford it. This is not good. I have been doing business for 11 years now.”

Another vendor, Adeline Mukuve (42), said, “They cannot take us there. It is very far from the shops. How can people go that far just to buy sweets? People are here at the shops and after their shopping, they give us the change. There at the taxi rank, there are no customers. Do they want to kill us? We are not going there; we are staying here and hustling here. I am not agreeing with that. I have been selling here for 14 years.”

Rosali Jonas (41) said, “No!, we cannot go there because our customers shop here in Shoprite. This is the only place where we can sell and I have been here for three years. We want our own market here at Shoprite not that side of Wernhil Park, it is too far.”

Ruthi Malungu (42), who has been in the business for eight years, also said, “If they have to build a market for us on that side of Wernhil Park, it will not work because there is already a market there. There is no money to make that side. I have been in this business for eight years now. It is better for us to stay here because this is where we get our children’s bread.”

Cycle Classic: Behind The Scene

What to Watch This Weekend