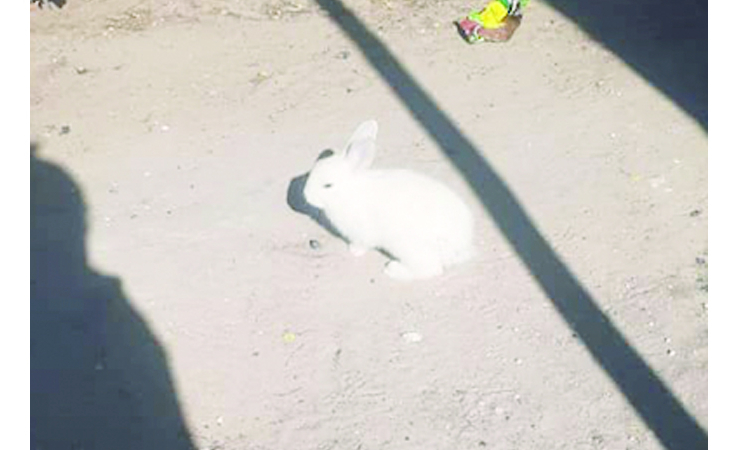 THE headman of Onelago D village, Petrus Tobias, and his family have been left spooked after a white rabbit sought refuge in their homestead.

Tobias suspects the uninvited guest is the result of witchcraft.

Speaking to The Namibian yesterday, the headman’s wife, Delila Mbambi, said the rabbit entered their house on Thursday afternoon and was first discovered by two toddlers.

The children initially thought the rabbit was a cat.

Mbambi said the children called one of their aunts to have a look at the house guest on Friday.

“I knew it was a rabbit, but I did not touch it. I do not know where it came from,” Petrus said.

She said the rabbit was “strange” and does not look like a “normal” rabbit.

“It’s not like other white rabbits I have seen. When I saw it, I called my mother and another lady into the house to come and see,” she said.

Mbambi yesterday said when she was called by Petrus, she and two neighbours went to their house to scrutinise the situation.

She said she notified the councillor for the Ondangwa Rural constituency, Kaushiweni Abraham, who later informed officials of the situation.

The officials allegedly took a picture of the rabbit, but left it in the house.

“They told us to ask our neighbours if anyone had lost a rabbit,” Mbambi said.

On Sunday, she invited her nephew, Daniel Mbambi, whom she said is a pastor at a charismatic church.

“When arrived at the house he prayed and threw water at the rabbit. He said if it runs away it’s witchcraft, but if it stays it’s a real rabbit.

“After the nephew finished praying, he threw water at the rabbit and it ran away and has not returned to the house,” she said.

Mbambi said she wanted to kill the rabbit with a spear, but was advised by neighbours not to kill it.

Mbambi said a few years ago, one of her sons killed a chameleon which entered the house, and allegedly fainted shortly thereafter.

Late last month, three dogs mistaken to be unknown creatures were shot dead at Oshitudha village in the Tsandi constituency after it emerged they were responsible for killing goats at the village.

Both environment official and Omusati police regional commander commissioner Ismael Basson at the time confirmed that the animals were in fact dogs.

Ministry of Environment, Forestry and Tourism spokeperson Romeo Muyunda says the animal is “a normal rabbit”, which has probably escaped from a nearby farm which keeps rabbits.

“”Nothing suspicious about it. It’s a normal rabbit,” he says.

Parliament in jeopardy – The Namibian