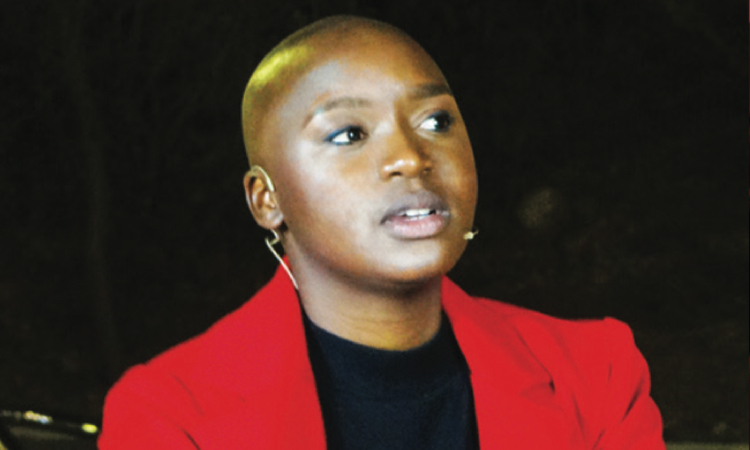 IT is the first Friday of spring and the grand façade of the Supreme Court towers over the scene of Ndiilokelwa Nthengwe’s book launch, the title of which may very well make the lawmakers who walk its stately halls baulk.

‘You F*cked with the Wrong Generation – An Ode to Modern Day Activism in Namibia’ is Nthengwe’s second book and the launch of it draws an ardent crowd, sipping complimentary rosé at Berrylicious, a sparkling eatery in the city centre.

I know this because everyone featured is deliberately introduced. Each one is invited on stage to have their contribution honoured and the whole thing plays like a showcase of the young talent that exists in Nthengwe’s orbit or was integral in the creation of the book.

When Nthengwe finally takes the stage, during an evening punctuated with ShutItAllDown protest chants (“Ons is moeg! You f*cked with the wrong generation!”), it seems strangely secondary.

Despite the fanfare and their somewhat cult following, Nthengwe cuts a humble figure.

The activist and author has been at the forefront of numerous intersectional social justice movements including the fight for sexual and reproductive health rights, the recognition of lesbian, gay, bisexual, transgender, queer and intersex and other community’s human rights and 2020’s ShutItAllDown protests against sexual and gender based violence.

Nthengwe’s ode to activism, much like the author themselves, is many things.

It is a consideration of so-called keyboard warriors who harnessed the power of Twitter to organise in real life. It is a reflection on activism as an industry, a guide to the many ways one can be an activist and a plea to prioritise mental health in activist spaces. It is also an anecdotal offering from within the eye of the storm, offering insights into that famed presidential meeting, the ShutItAllDown scandal and the tight rope that must be walked in the era of cancel culture.

“I was reflecting a lot about modern day activism in the past two years but there’s also been a lot of trauma,” says Nthengwe, dressed in the red and black of their book cover. “I wanted to make this book not just about my journey but I was trying to bring more empathy for everyone else’s journey during the process.”

Hinting at ShutItAllDown’s new incarnation as a political party and their own departure from activist roles they have played before, Nthengwe is the evening’s star at the centre of a young political sphere that includes the Landless People’s Movement’s Utaara Mootu, who casually takes the stage.

“Ndiilo is my sister, my friend but she’s one of those people who give us headaches as politicians. She’s always knocking at parliament’s door, always calling and I really thank you for always sticking to your word, for keeping us accountable because we do need a reality check all the time,” said Mootu, clad in a black beret in line with the evening’s theme of a touch of activism.

“These types of platforms are important because it’s not only just young people taking ownership, taking space but it’s us creating our own identity, telling our stories,” Mootu said.

“As young people, we’re always told we’re not serious. This platform already tells us that we are taking the bull by the horns,” she said.

“As a young politician supporting activists who also stick us in the back shows that there’s democracy. That we are able to support each other. We are able to disagree and we are able to push each other to ensure that Namibia, Africa, is revived and young people take over because we are the rightful people.”

The crowd snaps their appreciation. Nthengwe eventually begins their book signing and the night is alight with the kind of hope that prompts an audience member to imagine the author as a future president.

If you’re going to launch a book, this is certainly one way to do it. As a platform for young artistic talent and as an ode to activism below the Supreme Court and the setting sun.

Man dies after falling from a donkey